Video games and titty bars - 'not like love and marriage'

The United States Constitution has once again affirmed the freedom for video strippers in Rockstar's Grand Theft Auto: San Andreas to shake their digital naughty bits without fear of trademark violation.

The 9th Circuit Court of Appeals yesterday dismissed a lawsuit by owners of the East Los Angeles strip club, "The PlayPen," against Rockstar's depiction of a similar strip club called "The Pig Pen," located in the game's fictional city of East Los Santos.

ESS claims that Rockstar borrowing the PlayPen's "distinctive logo" and look without their permission is likely to confuse customers as to whether ESS has endorsed or is associated with the virtual strip club.

The case against Rockstar was originally filed in district court on April 22, 2005 and received a summary judgment in Rockstar's favor based on freedom of speech rights.

The PlayPen's logo consists of the words "the PlayPen" and the phrase "Totally Nude" displayed in a public domain font with a nude silhouette of female dancer in the first "P." The court's three-judge panel notes there are also several different versions of the silhouette used in various forms of the club's advertising. 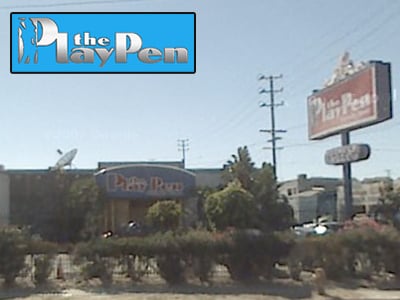 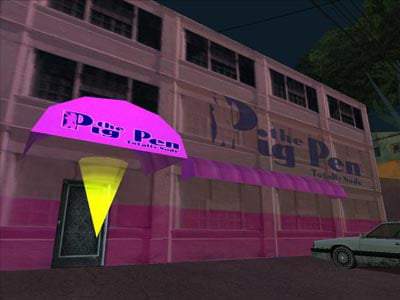 One of the above locations offers an all-you-can-eat jumbo shrimp buffet between 11:30 AM and 2PM. Can you guess which?

ESS further contends that because players can ignore the rest of the game and spend as much time as they want at the Pig Pen, the virtual strip club can be considered a significant part of the game.

San Andreas game designers do in fact admit they took inspiration for the virtual club from photographs of the PlayPen. They also claim to have used design aspects from other strip clubs in the East Los Angeles area in its creation.

The appeals court's affirmation of Rockstar's First Amendment rights produced some gems from the judges:

Both San Andreas and PlayPen offer a form of low-brow entertainment; besides this general similarity, they have nothing in common. The San Andreas Game is not complementary to the PlayPen; video games and strip clubs do not go together like a horse and carriage or, perish the thought, love and marriage. Nothing indicates that the buying public would reasonable have believed that ESS produced the video game or, for that matter, that Rockstar operated a strip club.

A player can enter the virtual strip club in Los Santos, but ESS has provided no evidence that the setting is anything but generic. It also seems far-fetched that someone playing San Andreas would think ESS had provided whatever expertise, support, or unique strip-club knowledge it possesses to the production of the Game. A reasonable consumer would not think a company that owns one strip club in East Los Angeles, which is not well known to the public at large, also produces a technologically sophisticated video game like San Andreas.

As for ESS's argument about players spending all their game time in virtual strip club:

But fans can spend all nine innings of a baseball game at the hot dog stand; that hardly makes Dodger Stadium a butcher's shop. In other words, the chance to attend a virtual strip club is unambiguously not the main selling point of the Game.