Of course, fancy hardware means nothing unless you’ve got a good selection of games to play. It’s still early days for the iPod Touch and it can’t yet match the sheer variety of games that are on offer for the PSP or the DS. However, the phenomenal success of the iPhone has already attracted some big names. Recent releases on the iTunes App Store include such A-list titles as Spore and Star Wars: The Force Unleashed. These aren’t the full versions of the games that you’d buy for the DS or PSP, but they don’t come at full price either. Both those games cost £6, compared to around £25 for the DS and PSP versions, and there’s a good selection of less expensive arcade games such as Pac-Man and Tetris for £3–5 each. There’s also quite a large number of free games. One of the top free downloads from the App Store at the moment is Touch Hockey, a game that lets you flick a hockey puck around the screen with your finger. 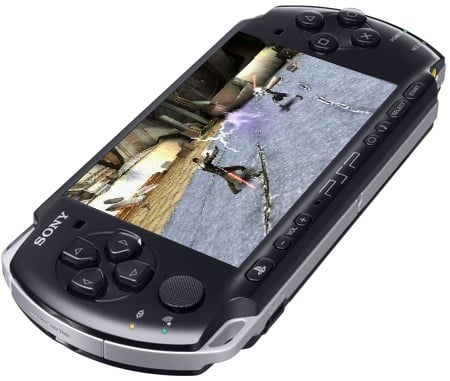 Sony’s PSP: only for red-blooded gamers?

While the early signs for iPod Touch games are encouraging, the fact remains that the iPod is still massively outgunned by the vast selection of games that are available for the PSP and DS Lite. Both devices can boast a library of hundreds of games covering all the main gaming genres. However, like their larger console counterparts, the Sony and Nintendo handhelds tend to focus on different areas of the gaming market.

In some ways, the PSP is the most conventional of these handheld consoles. It only has one screen and it relies on old-fashioned thumb-twiddling to control games. However, it does have the largest screen, a high-quality 4.3in widescreen display that’s ideal for mobile games. The recently released PSP-3000 is claimed by Sony to improve the screen quality even further, especially when used outdoors in broad daylight.

Sony’s core audience for the PSP is the stereotypical computer games fan, typically young men in their late teens and early twenties who want to drive fast cars, play football and just generally blow stuff up. This is reflected in the popularity of PSP games such as God of War, FIFA ’09 and, yet again, Star Wars: The Force Unleashed, which all tend to be priced in the £25–20 range. If you’re serious about your gaming then the PSP is the mobile gadget you’ll want to find under the Christmas tree this year.

In contrast, the DS Lite, like the Nintendo Wii, is much more of a ‘fun’, family-oriented gadget aimed at casual gamers of all ages. With a typical price of around £100, it’s far and away the cheapest of the handheld consoles, and the innovative dual-screen design has encouraged games developers to come up with a wide range of ingenious games designs.