Toshiba has introduced a gaming laptop with not one, not two but three graphics chips on board.

The Qosmio X305-Q708 packs in a pair of discrete GPUs - Nvidia's GeForce 9800M GTS chip, to be precise - that operate together in SLI mode.

But the laptop also uses Nvidia's GeForce 9400M chipset, which integrates a graphics core of its own. It's the same chipset used in Apple's recently released dual-GPU MacBook Pro. 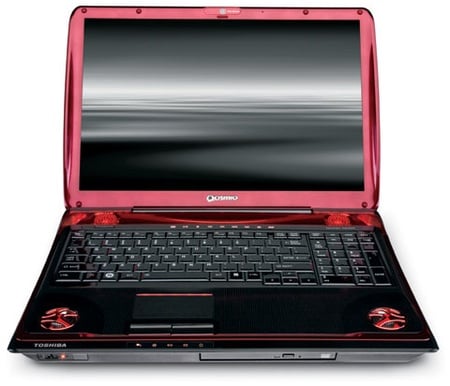 Alas, the laptop doesn't appear to be able to use all three graphics cores simultaneously. Instead, gamers can use the SLI-linked discrete parts for games then flip to the integrated GPU to conserver power when running away from the mains.

Nvidia was, of course, cock-a-hoop about the launch, spoiled only by Toshiba's decision to kit the GeForce-filled laptop out in ATI red.