Maui is erupting and its product is called Atmos. This is pretty appropriate as it's a cloud computing product and Atmos is atmosphere minus the spherical bit.

It's not a blow-your-socks-off eruption like Mount St Helens - it's more like one of those Hawaiian volcanoes that just start up and steadily pour out lava. In fact EMC has outsmarted us all. The eruption, the product, started in June and it's been shipping to early adopters for five months already. Only now has the announcement been made.

Maui is policy-driven software for placing and protecting data objects. The product is simple in conception and aimed at providing vast petabyte levels of storage for cloud storage and service providers, web 2.0 companies and others needing to have a globally distributed storage resource without the complexity, EMC says, of today's SANs and NAS systems. There is no RAID, only objects and copies of objects and metadata stored on Hulk (Infiniflex 10000) arrays which have highly intelligent X86 controllers running the Atmos software and looking after dumb SATA JBODS (Just a Bunch Of Disks) connected via SAS links.

Atmos stores unstructured information as objects in a global object namespace, and can scale to store billions of them in a multiple petabyte infrastructure. It has a high degree of self-management through settable policies describing how objects should be stored, meaning the number of copies, their placement and their longevity.

Object copies are distributed for protection (backup, business continuance, disaster recovery) and for accelerating access. If you are in San Francisco and the object originated in Beijing it makes sense to copy it and have it sent to San Francisco. The Atmos SW does this as part of its background duties. The system is built on the notion that parts will fail and this must be provided for.

Policies can be set-up, varied and developed by sysadm staff

Atmos has the concept of storage targets and Mike Feinberg, EMC's SVP and general manager of its cloud infrastructure group, listed some: compressed, spin-down and object-level de-duplicated. These could be future variants of the Hulk hardware.

Services such as replication, versioning, compression, de-duplication and spin-down are built in with access through web services (REST/SOAP) and also file system access layered on. There is support for multi-tenancy, so that cloud service providers can safely and securely separate different customers' object sets. 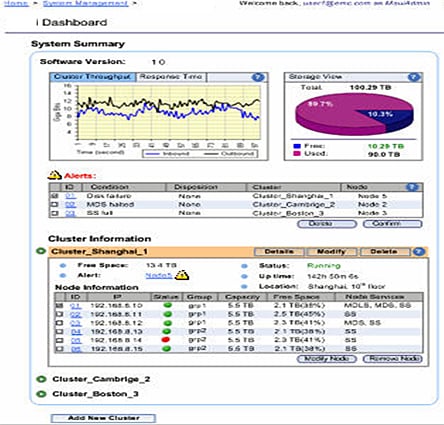 There are three hardware configurations: the WS1-120, -240, and -360 with 120, 240 and 360TB of capacity. The dashboard shot above suggests that Hulk can be clustered - EMC doesn't say in its released statement. The compute and the storage aspects can be scaled independently. There is no information on the controller HW but a quad-Xeon-based approach with one, two and four CPUs in the configurations above looks feasible.

EMC knows it has to price competitively to provide an affordable cost/GB for a global multi-PB infrastructure. Trust us, EMC is saying, we will be competitive compared to multi-PB SANS and filers and CAS (content-addressable storage) stores. All Feinberg will say is: "The price will be aggressive." For some reason EMC is keeping its pricing powder dry for now.

So this is Atmos, cloud-optimised storage (COS) as EMC describes it, the fourth leg of its storage table with the other legs being block (Symmetrix, Clariion), file (Celera) and reference objects or CAS (Centera). We're well short on details - EMC says more Atmos technology will be announced through 2009, so we'll learn more then.

Atmos as a word doesn't have the same ring to it as the other EMC brands, but it could turn out to be just as important. ®