Updated Visa cards with a built in one-time code generator are to be trialled by four European banks. The technology is designed to tackle the growing problem of online credit card fraud.

MBNA, a Bank of America company in the UK, Corner Bank in Switzerland, Cal in Israel and IW Bank in Italy are to take part in limited trials of Visa's new one-time code card. 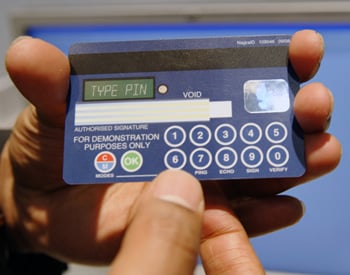 The next-generation cards feature a numeric keypad on the back of a plastic card. Customers enter their PIN code to generate a one-time password. This code, displayed on a card’s display panel, is then used to authenticate online purchases.

The approach is an alternative to using a password when authenticating online purchases through the much-criticised Verified by Visa scheme. As previously reported, VbyV passwords can often be easily reset knowing only card details and a user's birthday.

The new cards, developed in conjunction with Australian firm Emue Technologies, are far more secure - though not infallible. Some banks have already introduced two-factor authentication technologies, which grew up in the corporate remote access market, to provide extra protection to online banking transactions.

The approach means that basic phishing attacks aimed at tricking users into handing over online credentials are insufficient to compromise accounts because the code, typically generated by a separate token or other piece of kit, is also needed to log into accounts. That still leaves open the possibility of man-in-the-middle attacks, where hackers set up websites that pose as the real thing, tricking users into handing over one-time passwords which are relayed to genuine banking sites in real-time.

A spokesman for Emue explained that its card has the ability to digitally sign transactions, hence the ability to mitigate MITM (man in the middle0 attacks. "This is just one of the features that can be pre-loaded on the card", he added.

Although one-time code technology in general is no silver bullet capable of slaying online fraud it is a big improvement on using passwords, which as Visa Europe points out can easily be forgotten. Bundling the one-time password technology into a card also means users don't have to deal with multiple items of kit.

Problems in getting out a personal calculator-style keypad delayed the introduction of Barclays' PINsentry scheme, which like the one-time code generator is also designed to combat online fraud. Emue has managed to develop technology with a three-year battery lifetime, overcoming one of the potential stumbling blocks to the scheme.

Corner Bank has invited 500 to take part in the trials. Other banks will be running the trials with up to 3,000 punters, a Visa spokeswoman explained.

The trials will start in the next few weeks and last from six-12 months, depending on the banks.

Visa was keeping its cards tight to its chest is discussing how the cost of the on-card technology compared to providing separate one-time code generating devices. "We are working through these [costs] with individual banks. As this is of commercial nature the cost cannot discussed outside any of the banks we are working with," a Visa spokesperson told us.

A slightly cheesy video of the technology in action can be seen here. Images of Emue's card technology can be found here. ®

Boss reckons half a dozen institutions will follow suit this year