A Dutch company has proposed an interesting new kind of pumped-storage energy station. Normally, such facilities work by pumping huge uphill reservoirs full of water and letting it flow out through hydro-power turbines later on to release the stored energy. This one, however, works by emptying a huge reservoir. 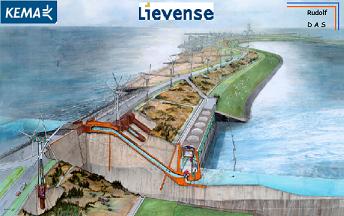 The plan is referred to as "Energy Island" by Netherlands consultancy Kema, which is proposing the idea as a good plan for the future, when Holland might have a large percentage of wind power.

The big problem of a largely wind-powered grid is that the wind doesn't usually blow when you need it to. Often there will be a big energy rich gale in the middle of the night, when very little electricity is required, and then at 5 or 6 pm next day - the time of peak demand - there might be a calm, just when a lot of juice would be really handy. Worse still, according to authoritative research, there will often be days-long midwinter calms across much of Northern Europe.

Enter pumped storage. Here, the idea is that when there's a lot of surplus power - breezy morning - you use the excess 'leccy to pump water uphill. Later on, when the turbines aren't giving you what you need - early-evening calm - you let the water run down again through a hydro turbine. Bingo - problem solved.

A pumped-storage station doesn't generate any power, then, but stores it. Generally speaking, such plans involve the use of lakes or lochs, ideally near mountains so as to be able to get a useful height difference.

But there's a problem there. Even in the UK, with all the mountains and lochs of Scotland, Wales and the Lake District to hand, eminent analysts suspect that it would be hard to actually build enough pumped storage to last the nation through a several-day calm (leaving aside for the moment whether such colossal engineering could be affordable). It would be a lot worse in flat, featureless Holland.

But that hasn't put off Messrs de Boer and Verheij of Kema consulting, or their co-authors on the "Energy Island" paper (pdf).

They propose an "Inverse Offshore Pump Accumulation Station", in which a ring of massive dykes would be built at sea off the Dutch coast. Then the interior of the circuit would be dredged out to create a 50m-deep, roughly 6 x 10 kilometre reservoir.

During times of energy surplus, sea water would be pumped out of the reservoir into the surrounding North Sea, until it was completely empty. Letting the sea flood back in via turbines emplaced in the dykes could generate 2 gigawatts or more for up to 15 hours at a stretch, the designers reckon. In other words, the "Energy Island" could store about 30 gigawatt-hours. You'd get back about 80 per cent of the energy you put into it.

As the spot price of 'leccy goes up and down massively in the presence of a lot of windfarms, the island could still turn a profit despite wasting 20 per cent of the input. It would be selling power back to the grid when it was expensive, and buying it in when it was cheap.

So - could systems like this deal with a five-day north-european calm, of the sort to be expected most winters?

Well, the CIA says that the Netherlands uses 108,200 gigawatt-hours of 'leccy a year, so for five days on average we'll need 1,482 GWh of storage - probably more in winter - say fifty-plus 10km x 6km "Energy Islands". They'd need to be stacked two deep in some places, Holland only having 450km of coastline.

It's probably no go, as de Boer, Verheij et al say that only certain locations would be suitable for energy islands. There'd be serious economic problems in paying for such a setup too, as spot-price fluctuations could be expected to pretty well iron out as soon as just one day's worth of storage was on line and doing business - let alone five.

And all this ignores the real kicker. That's just the present-day electricity demand of the Netherlands. The Dutch also use a million barrels of oil and fifty billion cubes of gas every day - all or most of which needs to be replaced by electrical alternatives some day. The electric-car, electric-heating, electric-industry future - if powered by wind - would mean the Dutch needing to pump dry much of the North Sea to balance out their supplies.

Anyway. Regardless of the ultimate usefulness of the Energy Island, it's a cunning idea and could be handy on a more limited scale. And better still, it brings us this jaw-droppingly brainless article from the Times, which tells us:

A man-made island housing a hydroelectric plant and generating enough electricity to supply two million Dutch homes is planned ... Pipes in dykes would allow sea water to pour in, generating electricity in the same way as some dams. The water would then be pumped out. The electricity generated by the water pouring in is matched or exceeded by that needed to pump it out.

Except that it won't supply any energy itself. The island could supply two million Dutch homes when fully emptied, yes - but for only about half a day.

And no, power out isn't "matched or exceeded" by power in, it's definitely exceeded. There are no perpetual motion machines.