A savvy online campaign by Barrack Obama and the Democrats is at least partly responsible for enabling last week's landslide victory in the US presidential election.

Obama's web sites presented the candidate, garnered feedback, and tried to quash negative whispers. Sites like Facebook served as recruiting grounds to an army of volunteers, who teamed up and mobilized.

Now Obama is taking online feedback on what's next.

The Grand Old Party (GOP) delivered claims as if sites like YouTube and Google didn't exist to verify them or put them under the microscope. The GOP gave a platform to people that rallied the base but made the party look out of touch and offensive to the wider audience watching on YouTube - never mind TV. Claims over who supported research into grizzly bear DNA didn't stand up to scrutiny following a quick Googling.

Languishing in defeat and in the midst of recriminations, the GOP has woken up to the internet and has gone Obama by courting the thoughts of ordinary Republicans on what's next. The party has announced Republicanforareason.com where party members can post comments along with YouTube videos on what went wrong and what's next. The goal is to make the party "better prepared for the future," the GOP said in a statement. 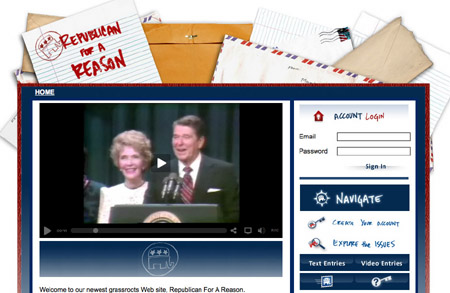 The party said this updates an earlier Platform web site, launched in the run-up to the 2008 Republican National Convention.

A quick trip through the messages and videos posted to the new site, though, illustrate the party's ideological schizophrenia and challenge it faces in a country that's increasingly diverse, tech savvy, and getting more of its information from a variety of sources.

It also shows how it'll take more than just a web site to fix things.

Among the messages are those who say they've given up on the Republican party because of its negative attacks, over-spending, and corruption under the current president George W. Bush. Some want the party rebuilt, with a younger, forward-looking focus.

"I am a conservative. I am no longer a republican. I believe that under the Bush presidency our constitutional rights were under attack. I believe that the republican party has become the enforcer of big government. It seems to me that the party no longer deserves to call itself republican," one person posted.

Others, meanwhile, are spitting about keeping true to the party's values and calling on those who'd wish to "reach across the aisle" to "shut up."

Worryingly for the party in a country that appears to have shifted away from the brand of national and social conservatism that were the hallmark of Bush, it's the latter comments that are getting the most stars in the users search rankings on Republicanforareason.com.

In a fitting testament to the challenge, Republicanforareason.com opens with an inspirational video of former US president Ronald Reagan. Reagan is a Republican whose personality and philosophy some on the right view as the way forward.

Reagan is known as "the great communicator" in certain, admiring circles. Reagan, though, was elected in 1980, in an analogue era before most people had even seen a PC and years before the existence of Windows, never mind the internet that the GOP seems to have overlooked.®

* Yes - we know he didn't really claim that.