Once again the observant techbeat watcher finds his or her lower-torso garments endampened by fear, as news emerges that heavyweight US military nerds believe that they have developed IT tech which can "regenerate" autonomously, allowing it to self-repair in the face of shutdown attempts - and even to learn and develop its capabilities. More terrifyingly still, plans are afoot to put this technology into the US forces' next generation of robotic weaponry. 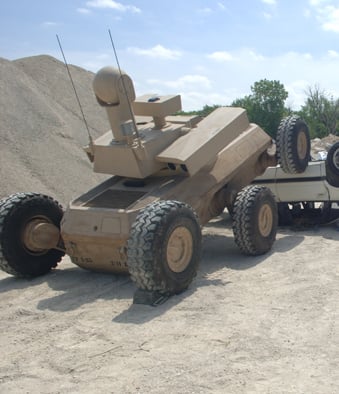 Attempting to flee in your puny conveyance is useless, humans!

Bow before your self-regenerating software overlords!

The "Self-Regenerating Systems" SRS auto-programming programme is the brainchild of the renowned Pentagon barmy-boffin bureau, DARPA, where they never saw a self-aware computer network hellbent on the extirpation of humanity they didn't like. SRS has been underway for since 2004 at the Information Processing Techniques Office. According to DARPA:

The SRS program is to develop technology for building military computing systems that provide critical functionality at all times, in spite of damage caused by unintentional errors or attacks ... The SRS program aims to develop technologies enabling military systems to learn, regenerate themselves, and automatically improve their ability to deliver critical services. If successful, self-regenerative systems will show a positive trend in reliability, actually exceeding initial operating capability and approaching a theoretical optimal performance level over long time intervals.

So far, so blah. Just because DARPA wants the moon on a stick doesn't for a moment mean it'll actually get it. The mere fact that the US Army is also planning to field a deadly robotic legion featuring heavily armed droid tanks, kill-choppers, hovering spy probes, man-sniffer sensors and so on shouldn't worry us. The SRS tech will probably never work, and if it did there's no way it could get control of the heavily armed bot horde.

Except that yesterday DARPA banged out this announcement (pdf), in which it says:

DARPA is requesting information from vendors who have developer’s access to high value, hard real time, mission critical, military information systems ... The goal ... is to explore the technical feasibility of dramatically improving system survivability and reliability with technology and techniques that DARPA has recently developed under the Self Regenerative Systems (SRS) program.

In other words, the SRS programme's unshutdownable, self-repairing awareware is ready to go, and traitorous DARPA boffins (doubtless the robots are holding their families) want to put it into things being built now. The horribly beweaponed robot kill-choppers and crewless tanks of the Future Combat Systems force, for instance, or the new "Predator" missile-packing unmanned hunter-killer planes which need no human piloting even by remote.

We'll just have to pray that rival US military brainboxes - even now toiling on humanity's trump card in the future war against the machines, the circuitry-toasting electropulse bomb - can be ready first. ®