Tackling the freebooters of the 'Gate of Tears'

Analysis As everyone knows, runaway piracy is a terrible threat. Unchecked, pirates might destroy the very business models which underpin much of our economy, bringing legitimate commerce to a halt - with devastating consequences both for those who make things and for those who use them.

That may or may not be true on the internet: but just lately, a headline featuring the word "piracy" has actually been more likely to refer to the hijacking or looting of ships at sea, as in the pre-digital era. Specifically, most of the recent coverage has been focused on modern-day freebooters operating from the lawless coast of Somalia. 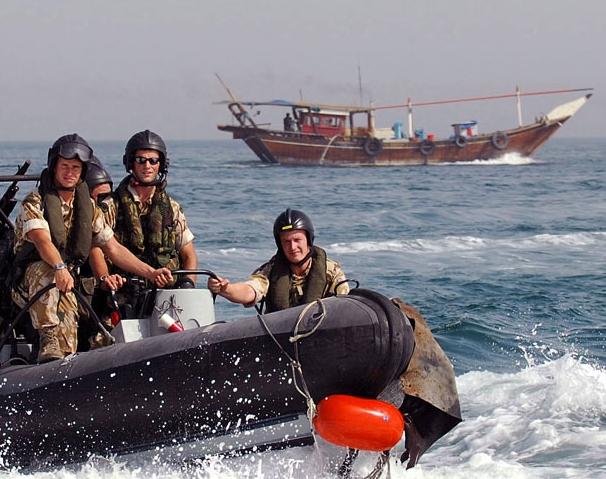 This is one way of chasing pirates

Just this Tuesday, in fact, Royal Marine Commandos* in seaboats got into a gunfight with the crew of a small pirate dhow which had previously attempted to seize a Danish merchantman not far away. Having been fired on by the foolhardy freebooters as they approached, the Marines killed two of the pirates and the rest surrendered smartly - but this doesn't signal the end of piracy in the area. Indeed, the following day, even as the news of the success broke, a Turkish tanker was seized in the very same waters.

Somali and Yemeni buccaneers are a particular problem for international trade as they are ideally situated to prey on traffic passing through the Bab el Mandeb ("the Gate of Tears") - the narrow strait at the southern end of the Red Sea, which carries all the traffic between the Suez Canal and the Indian Ocean. Wherever there's a maritime chokepoint like that, and a poor or lawless region nearby to act as a safe haven, you get piracy. Another well-known hotspot, for instance, is the Singapore Strait.

So the Bab-el-Mandeb has been a somewhat risky area for peaceful mariners time out of mind, and riskier still since the collapse of any effective government in Somalia. Nowadays piracy off the Somali coast is endemic, with gunmen in speedboats seizing entire ships as often as once a week - then often holding them for ransom in the infamous pirate port of Eyl. (So far there isn't all that much reselling of ships and cargoes, apparently. Ransoms are seen as simpler and more profitable.)

There's been a good deal of arm-waving about all this in the British press lately. For instance, this remarkable effort from Times columnist Libby Purves, headed: "It's time to take on the gangsters of the sea - We run down British naval power at our peril. Without it we would have little food, fuel, or goods - or safety". (Emphasis mine.)

Purves has plainly been having a chat off the record with a serving or former Royal Naval officer or two - as also seemed rather likely in the case of the recent Lloyds List piece which sought to place the blame for the Navy's failure to stamp out piracy in the region on political-correctness-gone-mad at the Foreign Office.