FIRESTRIKE™: still too heavy for the average shark

US killtech behemoth Northrop Grumman has has said that it is ready to take orders for the "world's first ruggedised, weaponised high energy solid state laser designed for battlefield applications". The raygun module is dubbed FIRESTRIKE™. 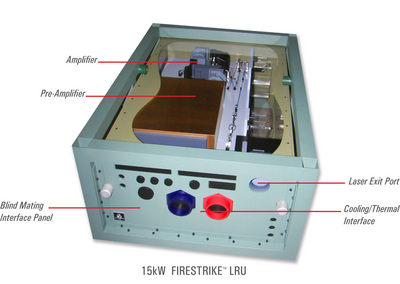 Northrop has long been working to produce weapons-grade solid state lasers with US military funding. To date, the only way to make a laser useful as a weapon in its own right - rather than a pointer for other systems, or a dazzler - has been to use chemically fuelled systems.

There are two combat lasers under development right now using chemical fuels. The biggest is the jumbo-jet mounted Airborne Laser (ABL), intended to blast enemy ICBMs above their launch bases. Then there's the Hercules transport-plane Advanced Tactical Laser (ATL) gunship model, intended perhaps as a silent, undetectable sky-sniper for the US special-ops community.

But chem lasers need big tanks of dangerous toxic fuel, and produce equally hazardous and corrosive exhaust products. Their logistics requirements are nightmarish, and realistically they are only for static use or mounting in large aircraft or ships.

Solid state lasers, powered by electricity, are much easier to deal with. Until now, however, they have had rather low power levels. As an example, Boeing's Humvee-mounted "Laser Avenger" has to be shone on an enemy munition for quite some time before it will explode.

Northrop reckon they've changed all that. A single FIRESTRIKE™ module weighs 400lb and delivers 15 kilowatts. FIRESTRIKE™s can be linked together to get a more powerful beam, apparently.

It would seem, then, that FIRESTRIKE™ is simply one of Northrop's previously-announced solid state laser "chain" units, ready for sale. The firm has said that at least eight of these can be linked up to get a proper 100 kilowatt beam, generally seen as the threshold for a true battlefield weapon. Beam quality, for the laser aficionados among those reading, is listed at "nominally 1.5 times the diffraction limit". Others may be pleased to note that FIRESTRIKE™s come with Ethernet interface as standard.

Energy efficiency for Northrop's chains is supposedly in the 20 per cent region. This suggests that a full-bore 100kW battle ray will weigh about 1.5 tonnes and require half a megawatt of power. That's pretty hefty, but it's within the ballpark for modern combat vehicles.

Portable blaster rifles or carbines aren't really on the cards yet, then. But a reasonably useful laser tank could well be a goer if Northrop can do what they say.

There was no word on possible waterproof versions, with handy attachments for mounting on the head of one's hollowed out volcano lair swimming-pool menagerie. ®