To mark the awesome inevitability of January 24, 2009 following January 24, 1984 after exactly one quarter-century, tech pundits will bloviate, Apple-bashers will execrate, and Jobsian fanboyz will venerate the munificence that flows unabated from The Great Steve. The din will be deafening.

To avoid the crowds, we at The Reg decided to go first.

Follow along as we run the rule over Apple Inc. (née Apple Computer, Inc.). We'll examine how the company has transformed itself in recent years, how its products stack up against the rest, and what lurks beneath its outward display of iconic style, forward-looking rectitude, and edgy innovation.

We'll also give Apple its report card, slicing and dicing the 25-five-year operation into bite-sized letter grades. Just so you can easily tell your friends. Our goal is a noble one: To arm you, dear reader, against the slings and arrows of outrageous commentary that will assault you from all corners come January.

Don't say we didn't warn you.

The Rise and Fall and Rise of Steve

Apple's last quarter century is best divided into a trio of Jobsian epochs: Steve I, No Steve, and Steve II. We're most concerned with the ongoing Steve II era and its ever-expanding worldwide cult, but first, a look back at the company's earlier incarnations.

Steve I - or Steves I, if you consider co-founder Steve Wozniak - saw the breakthrough of the Apple II (thanks, VisiCalc!), the embarrassment of the Apple III, the overreach of the Lisa, and the beginning of the Mac era. And towards the end there was Steve Jobs famously (and possibly apocryphally) asking PepsiCo's John Scully "Do you want to spend the rest of your life selling sugared water or do you want a chance to change the world?"

Scully said he'd forgo the sweetness, joined Apple as President and CEO, soon forced Jobs out, then nearly ran Apple into the ground by subdividing its offerings into multiple competing product lines and confusing wishful thinking with vision. 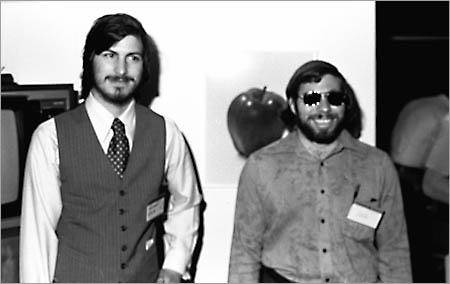 Although the No Steve era began on Scully's watch, it dragged on through the reigns of Michael Spindler (1993-1996) and Gil Amelio (1996-1997). It was characterized by bumbling attempts to revive Scully's failing Newton MessagePad, further muddying the product-line waters with Macintosh Performas, Centrises, Quadras, and more. Then there was the operating-system licensing program that allowed clone-making competitors such as Power Computing to skim the cream off the top of the high-end/high-margin market by repeatedly offering faster machines at lower prices than the mothership was capable of.

During this period, Apple went from being respected for its innovation to derided for its rudderlessness. Financial losses mounted, market share tanked, and developers moved from Apple to Windows 3.0 in 1990 and to Windows 95 in, well, 1995. The Apple Death Watch, always a popular parlor game, kicked up a notch or three.

Next page: The worst public presentation ever given by a sentient being…
Page: