The US military is seeking revolutionary new AI software which would be able to read text - and so effectively do research - in the same way that humans do. The so-called "Machine Reading" ware would initially be used for such tasks as automated military-intelligence analysis, but it would have wide consequences in civilian life as well.

As regular readers would expect, the auto-reader notion comes from DARPA. DARPA has the usual Pentagon revolving doors connecting it to the military-industrial complex and the ivory tower; it also has an express lift to the castle in the sky, a secret tunnel to the secure wing of the scientists' insane asylum and a special shooting range situated on both sides of the Grand Canyon - where only long shots can be taken.

The U.S. military frequently faces impediments to stability and reconstruction operations in a new location due to the lack of understanding of the local situation. Similarly, strategic assessment of a foreign nation’s science and technology base involves the continuous assessment of technical articles, bibliographies, conference agendas, etc. This information is often available on the World Wide Web, and some tools to assist this analysis are available, but the process would be significantly enhanced by a system that could directly analyze the information found in these text sources. The same reasoning could be equally valuable if applied to other types of open-source intelligence analysis, including assessing military readiness and posturing; political speeches, actions, and more obscure “messages”; economic trends and sentiments; and propaganda from terrorist groups and even their hidden web-based communications.

In other words, rather than having thousands of expensive human intel analysts surfing the web and putting together reports, why not just have some computers? 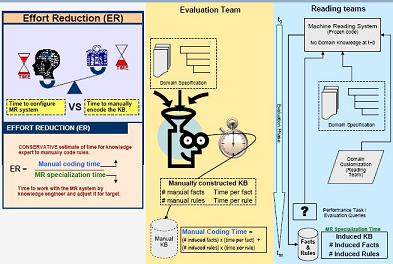 It's as simple as a funnel stuck into your head

The Pentagon brainiacs say that this is because computers are best at "formal" language. While they can work with text, if the text is written in "natural" human languages - for instance standard English prose, as opposed to data in fields - the machines don't do very well.

That's where "Machine Reading" AI-ware would come in. According to DARPA, what's needed is simple to describe in natural language:

A successful Machine Reading Program will be enabling all knowledge encoded as natural text to be combined with the power of AI reasoning methodologies, which will unleash a wide variety of new AI applications ranging from intelligent bots to personal tutors. For example, all of the text in the World Wide Web will become available for automating the monitoring and analysis of technological and political activities of nations; plans, rhetoric, and activities of transnational organizations; and scientific discovery within various disciplines.

However, there's another thing which doesn't lend itself to natural language apart from computers - that is, federal contract awards. There has to be a formal-language way to decide which competing Machine Reader systems are better than others, and indeed much of the DARPA solicitation (pdf) is devoted to accomplishing that very feat (see pic, which makes the methods clear even to the meanest intelligence).

Normally, of course, one looks at AI systems from DARPA and it's clear that if they work the consequences would be awful: humanity's few survivors scuttling like rats in the ruins of civilisation, etc.

In this case, the casualties might be more tightly focused. Essentially, anyone whose job involves primarily reading text on the internet and producing more text from it would be out of work. Graduate students in the humanities subjects, intelligence analysts, think-tank people, quangocrats ... and about 90 per cent of journalists.

Edge compute, AI on track for meteoric growth – or so these predictions say