Preview Visual Studio is locked so closely to Microsoft's platform that it cannot be prised apart and assessed in isolation. The forthcoming Visual Studio 2010, for better or worse, continues this tradition.

While full details on Visual Studio 2010 are not yet available, we have been able to piece together a fair amount by attending Microsoft's recent Professional Developers Conference in Los Angeles, California, and Tech Ed in Barcelona, Spain. There is also a preview you can download, though it comes as a virtual machine image and is not feature-complete.

Here is The Reg's quick tour of what you can expect.

The new Visual Studio will be delivered with .NET Framework 4.0 and Visual C++ 10 and will support Windows 7 and the Azure Services Platform. There are also significant changes to Microsoft's Application Lifecycle Management tools, called Team System.

Parts of the suite, including the code editor, are built in Windows Presentation Foundation (WPF), the GUI framework introduced at the same time as Windows Vista but not widely adopted, thanks to its heavy system requirements along with hints from Microsoft that it was not yet ready for business applications. 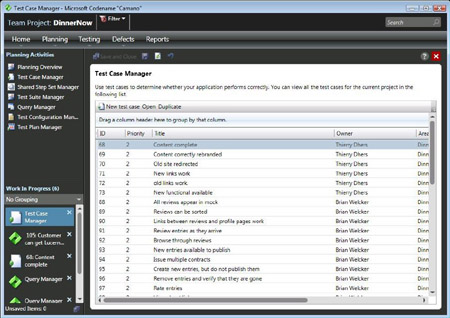 The company is now changing its tune. "The fact that we're committing to WPF in Visual Studio is our sign of what we think about its readiness. We're banking on it in a big way," product unit manager Shanku Niyogi told The Reg.

It also makes use of a new library called the Microsoft Extensibility Framework, which you can also use in your own code, for add-ins. Sam Guckenheimer, Team System group product planner, cautioned the change is not as deep as it first appears. "All the stuff that is in Visual Studio today is very similar in 2010, most of it is unchanged," he said. "Where we are doing things that have no today equivalent, the natural choice is WPF."

Microsoft has U-turned on how C++ applications are deployed. In recent versions, the runtime libraries have been deployed using Windows side-by-side, complicating installation and raising mystifying error messages about loading the C runtime library incorrectly if you got it wrong. "This is a little sin we introduced in Visual Studio 2005 and perpetrated in Visual Studio 2008," program manager lead Boris Jabes said at PDC. No more. In Visual C++ 10, you can simply put the runtime DLLs in the application directory and it works.