The madness of 'king cores

80-core servers will add-up to nothing without hypervisors

Opinion Intel is pumping up its virility through proxies like Michael Dell reminding us of an 80-core chip future. It's impressive, but Intel is a company obsessed to distraction with Moore's Law. It's like watching a crack addict do anything to get the next hit, a doubling of processor performance every 18 months, whatever it takes, in Intel's case.

The software industry already has problems writing and compiling multi-threaded software so that the threads can be spread across the cores and execute in parallel. The more thread bandwidth there is in a chip the harder the job gets.

Intel's very recently announced Core i7, the seventh iteration of its Pentium technology using the Nehalem micro-architecture, has four cores each running two threads. Stick that in a 4-socket server and you have Hyper-V heaven: 16 CPUs and 32 threads and say 5 VMs/core giving us 80 VMs in one server. 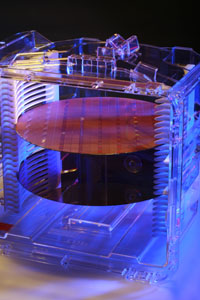 To my mind, and admittedly I've got the brain of a 6-year-old here, that's okay if the hypervisor can push a a set of VMs onto each core and each VM's threads run on that core. The overall set of software threads in the server gets carved up by the software stack before we get to compiled app code threads having to be run across separate cores.

That's a killer problem. Hold that thought for a moment and consider this: my natty little MacBook has two cores already. Sony's PS3 has a Cell processor running 9 cores, one a controller core, the other 8 replicated graphics cores which do all the render work stuff, and very well too. That seems a classic multi-core, parallel processing app. Servers are now running quad-Xeons and the 6-core Dunnington has been announced with 8-core Xeons coming. Intel introduced us to Big Core Daddy Proto (wafer pictured) last year with Polaris, its 80-core teraflop chip demonstrator.

This isn't a proper many-cored chip as it is just - just! - 80 dual floating point engines and not X86 cores. But Intel's Paul Otellini and Michael Dell are talking confidently of 80 X86 cores on a chip. The intervening thing seems to be Larrabee, an Intel concept or design with 8 to 32 X86 cores that can do graphics processing jobs as well as standard X86 application work.