The glaciers - lying in the Hellas Basin region of Mars's southern hemisphere - stretch for "dozens of miles from edges of mountains or cliffs". Their discovery solves the mystery of the "aprons" spotted in the 1970s by Viking orbiters, described as "gently sloping areas containing rocky deposits at the bases of taller geographical features". 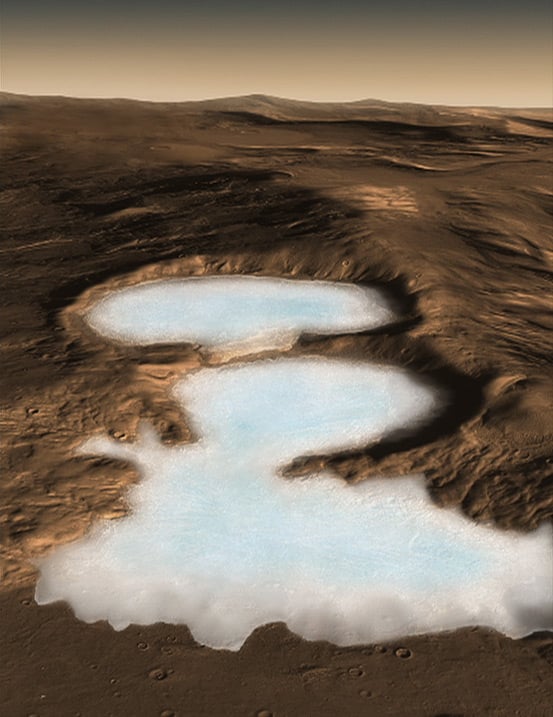 Scientists previously suggested the aprons might conceal "flows of rocky debris lubricated by a small amount of ice", but the truth has now been revealed. NASA explains: "Radar echoes received by the spacecraft indicated radio waves pass through the aprons and reflect off a deeper surface below without significant loss in strength.

"That is expected if the apron areas are composed of thick ice under a relatively thin covering. The radar does not detect reflections from the interior of these deposits as would occur if they contained significant rock debris. The apparent velocity of radio waves passing through the apron is consistent with a composition of water ice."

John W. Holt of the University of Texas said: "Altogether, these glaciers almost certainly represent the largest reservoir of water ice on Mars that is not in the polar caps. Just one of the features we examined is three times larger than the city of Los Angeles and up to one-half-mile thick. And there are many more. In addition to their scientific value, they could be a source of water to support future exploration of Mars."

The MRO has also spotted similar features in the Red Planet's northern hemisphere which, in common with their southern counterparts, lie roughly between about 35 to 60 degrees. Their rocky shield probably explains why they haven't evaporated at these latitudes, although how they got there in the first place remains a matter for speculation.

James W. Head of Brown University suggested: "The tilt of Mars' spin axis sometimes gets much greater than it is now. Climate modeling tells us ice sheets could cover mid-latitude regions of Mars during those high-tilt periods. The buried glaciers make sense as preserved fragments from an ice age millions of years ago. On Earth, such buried glacial ice in Antarctica preserves the record of traces of ancient organisms and past climate history."

The glacier-spotting team report their findings in today's issue of Science. ®