Does it feel good when I twist your circuits?

Stretch Armstong: bendy, stretchy and twistable. Not particularly useful.
Electronics: Useful. Not so much with twisty business.

If only researchers could figure out a way to... OH HEY!

Scientists Yonggang Huang of Northwestern University and John Rogers of the University of Illinois at Urbana-Champaign have developed a way to make circuits that can bend, stretch, and twist without breaking. They believe the technology will be useful to make new flexible sensors and solar panels, and for medical and athletic devices. 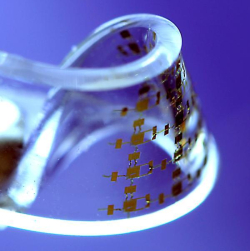 Their research was published online by Proceedings of the National Academy of Science and will be featured on its upcoming December 2 edition.

The two have partnered to create stretchable electronics since 2005, with Huang working on theory and Rogers focusing on experiments. Their new work improves on what was originally a form of single-crystal silicon they developed that could be stretched in one direction without changing its electrical properties.

The new design modifies the pop-up bridges into "S" shapes, which adds the necessary new dimension of flexibility.

"For a lot of applications related to the human body – like placing a sensor on the body – an electronic device needs not only to bend and stretch but also to twist," stated Huang. "So we improved our pop-up technology to accommodate this. Now it can accommodate any deformation."

Our favorite part: Northwestern describes the picture of the bendy circuit provided as "an optical image of an electronic device in a complex deformation mode". Science!