What on Praxis were Paramount thinking

The eagerly anticipated new Star Trek film is set to enthrall some and enrage others with a young, spunky cast, vicious fights and sex scenes.

A new trailer and new pics from the forthcoming film were released online earlier this week, further fuelling the excitement of Trekkies around the world ahead of the film's release on May 8 next year.

Directed by JJ Abrams - the man behind Lost and Cloverfield - Star Trek XI will detail the early days of James T Kirk and his crew and will chronologically sit after the TV series Enterprise, starring Scott Bakula.

These pics, in essence make up the fast-paced trailer, which features snippets from the childhoods of Captain James T Kirk, played by Chris Pine and Mr Spock, played by Heroes star Zachary Quinto, lending an insight to the men they grow up to become.

Young reckless Kirk leaps from a car before it plummets into a ravine, just to prove how reckless he really is

The trailer starts with a Corvette speeding through the desert being pursued by someone on a hover-bike. The car goes flying off the side of a canyon, leaving the young driver clinging onto the rocks for dear life. The pursuing driver, who appears to be a robot cop of some sort, steps off his bike and asks the youngster: "What is your name?"

To which, the boy replies in a bold, brassy manner: "My name is James Tiberius Kirk."

The young, pre-Starfleet Kirk wonders what the future holds for him...

The trailer then moves on to a slightly more grown up Kirk, this time speeding through the desert on a motorbike, before stopping by a futuristic factory - possibly the San Francisco shipyards where the Enterprise is being built.

...meanwhile, a young Spock - half human, half Vulcan - ponders his future

Actor Bruce Greenwood, who plays early Enterprise Captain, Christopher Pike (as we all know is destined to sit in a black chair and go "Beep"), talks as a voiceover: "You always had a hard time finding a place in this world haven't you? Never knowing your true worth."

"You can settle for less in ordinary life - or do you feel like you were meant for something better? Something special?" 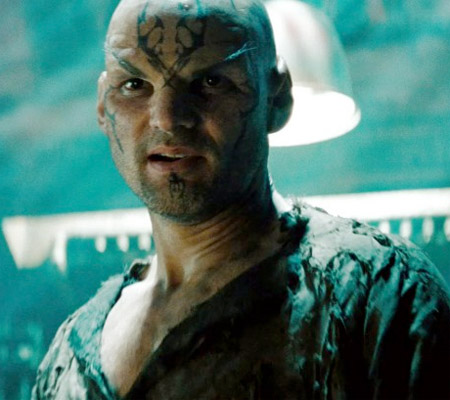 The action then switches to the Vulcan and centres on a young Spock looking inquisitive before moving to an older Spock, played by original Star Trek star Leonard Nimoy.

The older Spock is seated with his human mother Amanda Grayson, played by Winona Ryder, who gazes into her son's eyes. A mystery voice says: "You will always be a child of two worlds and fully capable of deciding your own destiny."

"The question you face is, which part will you choose."

USS Kelvin: The ship that was captained by Kirk's father George Samuel Kirk during the battle with Romulan villain Nero

The background story now established, we are introduced to Spock, as a young adult (Quinto) and his colleague Kirk, standing on the re-worked Enterprise bridge.

Not yet in control of his emotions, clearly. An enraged Spock hits out at Kirk