And other world news from the future

United States government intelligence hasn't exactly been on a winning streak for predicting future events, but recently it's been painting a somewhat bleak future for Western society.

A report released Thursday by the National Intelligence Council (NIC) predicts global trends in the year 2025 to better inform US policy makers.

NIC's report concludes the European Union will maintain its economic clout in 2025, but internal bickering and competing national agendas will leave the EU a "hobbled giant" unable to translate its position into global influence. 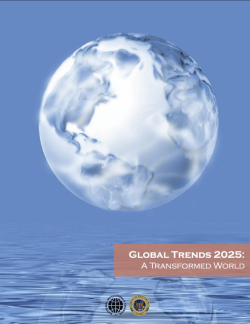 It forecasts that Europe's shrinking working-age population will become a major test of its social welfare model. "Progress on economic liberalization is likely to continue only in gradual steps until aging populations or prolonged economic stagnation force more changes – a crisis point that may not hit before some time in the next decade and might be pushed off even further." The agency said there will be no easy solutions for the problem, save cutbacks in health and retirement benefits, "which most states have not begun to implement or even to contemplate."

Disagreements in threat perceptions and a likelihood that defense spending will remain uncoordinated suggests the EU won't be a major military power in 2025, the report states. "The national interests of the bigger powers will continue to complicate EU foreign and security policy and European support for NATO could erode."

In 2025, the intelligence agency said that the US will remain the single most powerful country in the world, but that it will be less dominant. The shift in wealth and economic weight will continue to shift from the West to East.

"Even in the military realm, where the US will continue to possess considerable advantages in 2025, advances by others in science and technology, expanded adoption of irregular warfare tactics by both state and nonstate actors, proliferation of long-range precision weapons, and growing use of cyber warfare attacks increasingly will constrict US freedom of action."

On the economic front, rather than emulating Western models for development, more countries may be attracted to China's alternative development model.

In fact, the report states China is poised to have more impact on the world over the next 20 years than any other country. If current trends continue through 2025, China will become the world's second largest economy and a leading military power.

India will also continue to enjoy its rapid economic growth. The two countries must soon decide the extent of the role which they are able and willing to play on the global stage, the report states.

Russia has the potential to be "richer, more powerful, and more self-assured" in 2025 if it diversifies its economy and integrates with global markets.

"On the other hand, multiple constraints could limit Russia's ability to achieve its full economic potential." Those problems include decaying education and health, an undeveloped banking sector, and corruption, according to the NIC. "Shared perceptions regarding threats from terrorism and Islamic radicalism could align Russian and Western security policies more tightly, notwithstanding disagreements on the other issues and a persisting 'values gap.'"

Japan will be forced to restructure its political, social, and economic systems to address its continually shrinking work force. Due to increasing electoral competition, Japan's one-party system "probably will fully disintegrate" by 2025. The NIC predicts the country's Liberal Democratic Party will split into a number of contending parties, leading to "policy paralysis."

By 2025, Brazil will exercise greater regional leadership, but won't be able to extend its influence beyond the continent, the report predicts.

"The country's maturing commitment to democracy is on a secure footing with fair and open electoral processes and smooth transitions having become routine."

The Brazilian economy may get a dramatic spike based on preliminary finds of new, possibly large offshore oil deposits. "The oil discoveries in the Santos Basin – potentially holding tens of billions of barrels of reserves – could make Brazil after 2020 a major oil exporter when these fields are fully exploited."

Other countries on the NIC's shortlist of up-and-coming powers are Indonesia, Turkey, and Iran. The full report can be downloaded here. (8.3MB PDF warning) ®

Brexit freezes 81,000 UK-registered .eu domains – and you've all got three months to get them back

After years of waffle, potentially thousands of web addresses suspended

Better capital returns than cash and all allowed under company rules