It's Not Easy Being Green

In October 2003, Greenpeace asked Apple for information about the company's use of toxic chemicals in its products and manufacturing processes. Apple didn't reply. It wasn't until August of 2004 that Apple and Greenpeace had their first meeting on Apple's chemicals policy.

Judging from that meeting's results - or, rather, the lack of results - the two sides were about as compatible as Joe the Plumber and Barack Obama. Steve Jobs's reported suggestion to Greenpeace protesters at Macworld Expo that they "get out of the computer business [and] go save some whales" was only marginally less tacky than the aforementioned Plumber's crack that Barack Obama "tap dance[d]...almost as good as Sammy Davis Jr."

More attempts at a meeting of the minds followed, but when Greenpeace introduced its first Guide to Greener Electronics ratings in August 2006, Apple garnered a dismal 2.7-out-of-10 rating, ranking it fourth from the bottom of 14 electronics companies.

Fast forward to October 14, 2008, when Apple introduced its new MacBook and MacBook Pro lines. Both not only earned the highest Electronic Product Environmental Assessment Tool (EPEAT) rating, Gold, but they also received praise from a Greenpeace spokesperson who was quoted by CNetas saying, "This is greener than what Apple has been putting out. It's welcome news and it is also in line with their commitment to phase out all PVC and BFRs from all their products by the end of the year."

That same day, Jobs released his "Apple 2008 Environmental Update." In response, Wood Turner, whose Climate Counts organization earlier this year ranked Apple dead last among a dozen top electronic companies in efforts to fight climate change, told The Reg: "Apple's long-awaited 2008 environmental update is a hopeful sign that the company may be poised to take a leadership role in the climate crisis. At ClimateCounts.org, we're glad to see the company finally coupling product innovation with substantive companywide action." 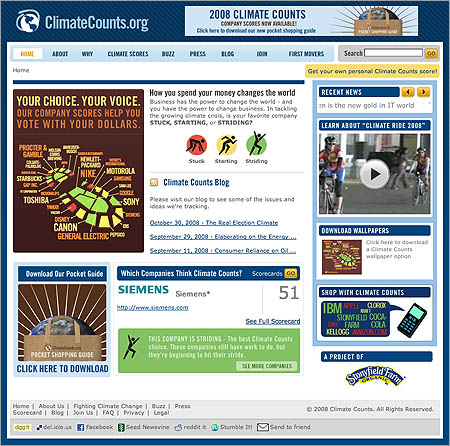 Forget the Tampa Bay Rays - Apple has engineered an even more impressive "worst to first" turnaround in regard to its environmental efforts. It's done so by focusing on four different areas:

One admittedly cynical caveat: You'll notice that many of Apple's discussions of its environmental efforts use squishy modifiers such as "studying," "working to...," "phasing out," and "improving." Nonetheless, although Apple hasn't gone fully green, the company's leadership appears to be taking environmental issues and global climate change seriously.

Next page: Brother, Can You Spare a Dime?
Page: