That said, there are obviously some familiar defaults - this version of Fedora ships with GNOME 2.24, which includes notable improvements such as tabbed file browser windows, some updated panels and other changes.

If you've been following GNOME development you'll know that the latest version features a new instant messaging framework by the name of Empathy. While Ubuntu chose to skip on Empathy, Fedora has taken the plunge to include it in this release.

Overall Empathy works quite well. It's a bit of a change if you're used to Pidgin, the old GNOME standby, but Empathy gets the job done. The only quirk we encountered was that, out of the box, Empathy didn't seem to like IRC. Installing the telepathy-idle package solved the issue.

Other system utility updates include the new NetworkManager that we saw in Ubuntu. As in Ubuntu, Fedora now allows you to manage all your network connections - wired, wireless and 3G from a single panel. It's very slick and, for the record, most of the work comes upstream from the Fedora team, not the Ubuntu devs. 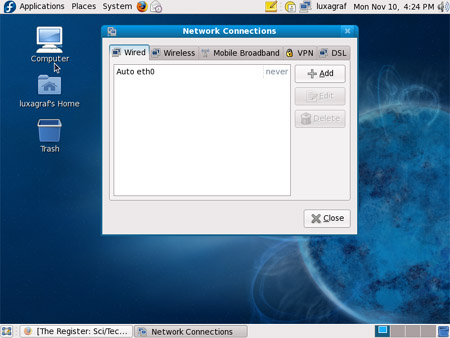 Manage all your network connections from one location

As with its predecessor, Fedora 10 features PackageKit with its very nice on-demand software for default apps. PackageKit makes Linux a bit more user-friendly. For example, if you download a PDF file, but don't have a PDF viewer installed, PackageKit notices that and offers to install the software you need. It makes for a much smoother Linux experience.

Of course PackageKit really only works for files that have a Linux-compatible app available - download a .flv movie and PackageKit will ignore it.

Speaking of proprietary things like Flash files, Fedora 10 includes the latest stable version of X.Org, which means no more support for proprietary nVidia drivers. The free driver will work for those systems, but you'll lose 3-D support, which is a shame.

As for the applications, Fedora includes Firefox 3.0, the latest release of OpenOffice - also version 3.0 - Rhythmbox and a few of the other GNOME usual suspects like GIMP. Other GNOME favorites like the F-Spot photo manager will need to be installed through the repositories.

Fedora 10 is plenty snappy, performance-wise, though of course the speed will vary greatly according to your PC's specs. We installed Fedora on an older machine with 1GB of RAM and found it to be on par with the new Ubuntu 8.10 in terms of speed.

But Fedora beats Ubuntu in some less easily described ways - something about Fedora 10 just feels very solid in a way that other distros don't. Despite being a preview release we didn't encounter any bugs, glitches or crashes.

We recommend Fedora 10 to anyone using version nine, and we also think it could be a nice alternative for those growing tired of Ubuntu or just looking to play around with a new Linux distro.

And of course Fedora isn't just a community project, it's also an incubator and testing ground for Red Hat's Enterprise Linux. While RHEL recently put out a beta version of 5.3, the next major release is slated to arrive in early 2010, after the features in Fedora have had a chance to iron out the kinks.

If Fedora 10 is any indicator, there shouldn't be too many to find. The latest release is fast, stable and definitely worth the upgrade. ®