As per the TT, the Z11's power cord slots into the end of the 'tube'. Again, it's rather more wobbly that we feel comfortable with, but with hindsight it's probably a good thing, helping to give the connector room to move if it's knocked or sharply yanked.

The far side of the tube is home to the Sony flavour-of-the-month green-lit power key, which sits next to VGA, HDMI, a second USB port and the optical drive. 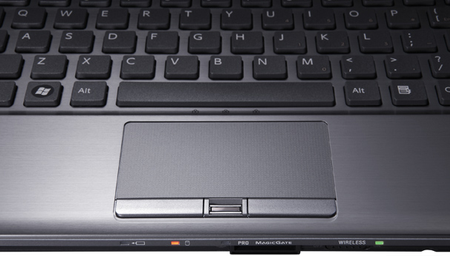 A rather basic touchpad

Switch from Speed mode to Stamina, and the Experience score drops to 3.8, the integrated graphics core's 3D performance pulling the overall rating down, though the GPU does rate 4.1 for desktop graphics. 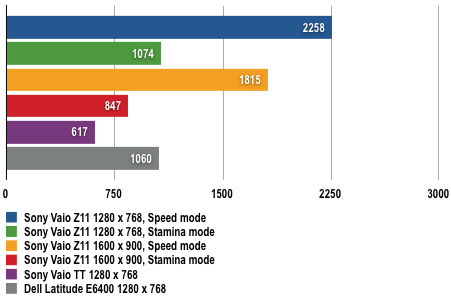 You can see the impact more clearly with the 3DMark06 numbers: at either of the two resolutions, the Nvidia GPU scores more than twice what the Intel one does, though there's nothing to choose between Sony's implementation of the Centrino 2 integrated graphics core and Dell's at matching screen resolutions.