Snipers are nasty, everyone knows that. They hunt people like animals, killing them without giving them a chance to fight or even to surrender. Few soldiers are more hated; even their own armies often seem less than pleased to have them around.

So why is the British Ministry of Defence happy to announce that it has just spent a large sum of money on new, supercool sniper rifles? Why are the British armed forces currently rushing to train as many new snipers as they can? Why is Blighty proud to claim that it makes some of the best sniper weapons in the world?

Why, indeed, are our old friends at DARPA - the Pentagon's one-stop-shop for the Q-branch and supervillain community - handing out money this week to develop a guided smart-bullet for use in sniper rifles? 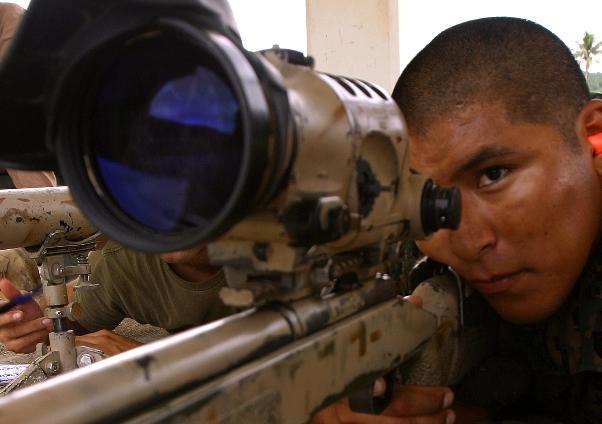 Reaching out and touching someone

It might be because there's another side to snipers and sniping after all. In particular, even though a sniper will often be personally responsible for huge numbers of deaths - body counts in the hundreds for an individual shooter are far from unheard of - as a class snipers kill relatively few people compared to the effects they achieve. Furthermore, when a sniper kills someone, it is almost always a person they meant to kill, not just someone standing around in the wrong place and time. These are not things that most branches of the military can say.

But, for a well-trained military sniper at least, "collateral damage" - the accidental killing and injuring of bystanders and unintended targets - is almost nonexistent. Mistakes do occur, but compared to a platoon of regular soldiers armed with automatic weapons, rockets, grenades etc a sniper is delicacy itself. Compared to crew-served and vehicle weapons, artillery, tanks, air support or missile strikes, a sniper is not just surgically precise but almost magically so. Yet he (or sometimes she) is reviled as the next thing to a murderer, while the mainstream mass slaughter people are seen as relatively normal.

Consider the team who put a strike jet into the air: a couple of aircrew, technicians, armourers, planners, their supporting cooks and medics and security and supply people. Perhaps fifty or sixty people, then, who together send up a plane which can deliver a huge load of bombs at least twice a day. Almost every week in Afghanistan and Iraq right now, such bombs are dropped. The nature of heavy ordnance being what it is, these bombs kill and maim not just their targets (assuming there is a correctly-located target) but everyone else around. Civilian deaths in air strikes are becoming a massive issue for NATO and coalition troops in Afghanistan.

Those sixty people, in a busy week, could easily put hundreds of tons of munitions into a battlefield - an amount of destructive power approaching that of a small nuclear weapon. This kind of firepower can and will kill many times more people than sixty snipers could in the same time span - and many of the dead will typically be innocent bystanders, often including children and the elderly. Such things are happening, on longer timescales, as this article is written. Furthermore, all these bomber people - even the aircrew - run significantly less personal risk than snipers do.

But nobody thinks of a bomb armourer, or a "fighter" pilot", or a base cook as a cowardly assassin. Their efforts are at least as deadly per capita, they run less personal risks, but they're just doing their jobs. And let's not forget everyone else: artillerymen, tank crews, machine gunners. Nobody particularly loathes them, or considers them cowardly assassins.