Normal British snipers don't use .50-cal weapons, though the special forces are known to have such rifles in their armoury. Blighty's snipers consider that cal-fifty rifles are on the whole too heavy and cumbersome for normal use. On the other hand the power of normal, oldschool 7.62mm is seen as a bit limited. 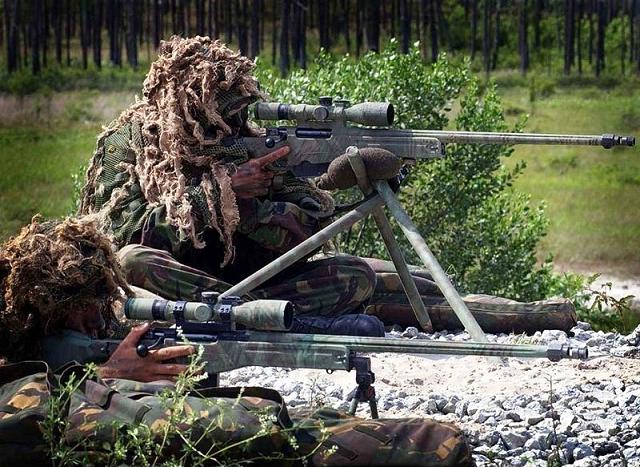 The trendy round among UK snipers for the last few years has been .338 Lapua Magnum, a cartridge specifically designed for military sniping as opposed to machine guns or battle rifles. The special forces and Marines set the fashion as usual around the turn of the century, with the .338 "arctic warfare" model from Accuracy International - aka "Long Range Rifle" or L115A3 - which has since become the must-have sniper weapon in the British military. (Arctic conditions are the toughest ones for a sniper rifle to be designed for - the AW rifles can be used in any environment.)

At the same time, in the last few years British battalion commanders have no longer been allowed to rub along without a sniper section. Every battalion is now expected to have a "master sniper", usually of colour-sergeant rank, who selects and trains the best soldiers in the unit for his section.

And just for once, the weapon of choice - the one the troops actually want more than any other, the one the special forces use - is British made. Accuracy International (AI), based in Portsmouth, is one of the best sniper-rifle firms in the world.

The firm isn't very chatty, owing to its close relationship with the special forces, but a catalogue can be got hold of quite easily. One option that probably caught the SAS' eye, we're guessing, is the suppressed job designed to shoot subsonic ammo. This means that not only are the rifle's blast and flash eliminated, but also the supersonic crack made by a normal high-velocity bullet - in other words the weapon is totally silent, ideal for quietly knocking off sentries or whatever. Sadly, the slow subsonic rounds only offer a measly 180m effective range, according to the company.

Anyway, the fact of AI being British has meant that the MoD has been quite willing to buy lots of nifty .338 AW rifles for ordinary army snipers, and indeed was proud to announce that as of last week it had now received all of them.

Meanwhile, America - as ever - seems determined to push the technology further, specifically in the matter of range.

Some snipers would argue in favour of cal-fifty as the ultimate long-range cartridge; others would be in favour of .338 Lapua. But almost all of them would agree that sniping beyond 1500m or thereabouts is strongly affected by matters such as the wind and how accurately it can be estimated, which may not be within the control of the sniper. Rob Furlong's astonishing 2002 shot in the Shah-i-Kot, for instance, may have been assisted by the thin air of the high Afghan mountains reducing atmospheric effects on the slug.

Beyond a certain point, not the best sniper in the world can accurately allow for the wind, changes in air temperature and other variables so as to aim off the right amount and score a hit. And yet, if this problem could be dealt with, ultra-high-power bullets have the momentum to reach targets a lot further off.