A guru for the brain dead

Comment Have you ever had the nagging sense that there's something not quite right with the adulation that follows Malcolm Gladwell - the author of Tipping Point? But you couldn't quite put your finger on it? We're here to help, dear reader.

Gladwell gave two vanity "performances" in the West End - prompting fevered adulation from the posh papers - the most amazing being this Guardian editorial, titled In Praise of Malcolm Gladwell.

It appears that we have a paradox here. A substantial subclass of white collar "knowledge workers" hails this successful nonfiction author as fantastically intelligent and full of insight - and yet he causes an outbreak of infantalisation. He's better known for his Afro than any big idea, or bold conclusion - and his insights have all the depth and originality of Readers Digest or a Hallmark greeting card. That's pretty odd.

So what's really going on here? Who is Malcolm Gladwell? What's he really saying? Who are these people who lap it all up? And what is it that he's saying that hold so much appeal?

The Master at Work

Gladwell is a walking Readers Digest 2.0: a compendium of pop science anecdotes which boil down very simply to homespun homilies. Like the Digest, it promises more than it delivers, and like the Digest too, it's reassuringly predictable.

The most famous book Tipping Point, takes an epidemiological view of social trends and throws in a bit of network theory. You won't draw anything more profound from this than "we're all connected" - gee! - and you certainly won't get the drawbacks of epidemiology - much of which is now indistinguishable from junk science.

A good book to write would be about how how epidemiology became so debased so quickly: it's now merely a computer modeling factory for producing health scares, or in the case of British foot-and-mouth disease, catastrophic policy responses that cost billions of pounds. John Brignell's The Epidemiologists [Amazon reviews / author's site] does just that.

(For good measure, Milgram's Six Degrees theory, has subsequently been debunked since Tipping Point appeared. Gladwell could have done that himself using a bit of investigative research of his own - but he probably wouldn't have liked the conclusion.)

The next book, Blink published in 2004, asks (in his own words) - "What is going on inside our heads when we engage in rapid cognition? When are snap judgments good and when are they not? What kinds of things can we do to make our powers of rapid cognition better?" But he ends up pursuing the idea that rationality is overrated - and with only speculative cognitive science to go with, it isn't suprising that this book, too, doesn't get to any conclusion.

And the message of the new one? Genius takes hard work. Again, it's something bleedingly obvious, but which leaves deeper questions unanswered. Take two geniuses: George Best and Tesla. What did they offer? Why do we admire them so much? There's obviously much more to each of them than perspiration - but we don't find out, and the book is as flattening and reductive as the others.

Perhaps it's Gladwell's stunning oratory that draws the crowds? Perhaps he's such a magnetic performer, that you go for the ride, not the destination? But when we see a example of the Master at Work - the evidence seems to suggest otherwise.

(Bear with me - it also sheds some light on the other half of the Gladwell puzzle - the adulation, which begins to look quite creepy.).

Here's an excerpt of the master strolling the stage at Ted - a presentation called Malcolm Gladwell on Spaghetti Sauce.

Gladwell blathers at great length about an obscure market researcher called Howard Moskowitz. Who? On his own website, Howie calls himself "a well-known experimental psychologist in the field of psychophysics". Yet Gladwell describes Moskowitz' market testing of varieties of soup as if he was an unsung genius of the 20th century.

All this takes up 15 minutes, but it's so repetitious and predictable, it seems to take about three times as long. (So much for the dazzling oratory Guardian leader writers admire.) From this Gladwell draws four lessons.

Firstly, people don't know what they want - or can't express it. (And need marketing geniuses to figure this out. Funny, that.) Secondly, Gladwell then asserts that horizontal segmentation "democratizes taste".

This is a very grand claim. It needs us to assume that there was very little diversity before - or that if it existed, producers and distributors didn't offer it. Yet step into an old sweet shop, an Italian deli, or a traditional pub serving Scotch malts, and incredible diversity abounds: these are very old recipes too.

You could equally explain consumer diversity because we enjoy greatly increased trade and affluence, combined with the new and cheaper technologies of production, all of which mean that things that were once exotic and exclusive are now available cheaply to us plebs. The Deli and malts examples suggest that where less-perishable goods could be brought to market in diversity, they were. No marketing segmentation specialists were needed.

So what Gladwell calls "horizontal segmentation" is a consequence not a cause of increasing trade and affluence, and technologies of storage and distribution. But hey, that would mean you were using the power of thinking, not Blinking! - so let's press on.

Gladwell's third point promotes a pleasurable brain spasm in the audience - and it introduces his narrative trademark. He adds a sloppy science generalisation to go with the sloppy marketing generalisation he's just made. 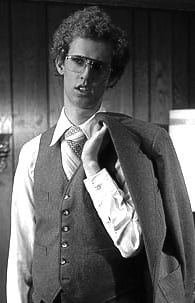 "Science is not about universals but about variability: genetics has opened the door to understanding of variability," Gladwell declares.

This is so breathtakingly dumb we'll have to return to it another day. It's a muddled moron's version of science. (For the time being, try Anton Wylie's potted history here). But note the self-serving aspect. A hundred years ago, Freud's nephew Louis Bernays came to America and by selling corporate America a cartoon version of his uncle's ideas, invented modern public relations. Surely a Gladwell role model, and similar to what he's doing - only there aren't any covered in his books, and the audience is "democratized", now: there are tens of thousands of people who can create an Excel pivot table!

And while the Marketing and Media types are still reeling from Point Three, he ends with a little liberal feelgood bromide:

"When we pursue universals in food we're doing ourselves a disservice..."

(I think we've already knocked down that straw man.)

"...In embracing the diversity of human beings we will find the true way to human happiness."

So there you've got Gladwell in essence: he always ends with a Hallmark style greeting telling you something sweet, bland and uplifting - that you already knew.

What does this tell us about the Gladwell fanbase? How can we explain the demand?

Next page: The rise and rise of the Vertical Marketing Bureaucrat
Page: