Taiwan might be best known to Reg readers as the home of the major DRAM manufacturers and other computer component makers but it is also home to the world's largest Buddhist charitable foundation.

It has very few paid staff, but thousands of volunteers give some, or all, of their time each week. They are expected to pay all their own expenses.

The Register went to Taiwan to see the Tzu Chi Foundation in action, courtesy of Stan Shih, a founder of Acer, a major supporter of the foundation. A big thank you to him, and to all the Tzu Chi volunteers who made our visit possible.

Starting with the support of 30 housewives contributing a few cents a day, the Tzu Chi Foundation now brings in millions of dollars in donations. It is the largest organisation which embodies “socially-engaged Buddhism”. Several broadly similar organisations have emerged in Taiwan in recent years. They call for Buddhists to actively engage in improving society rather than just seeking personal, religious enlightenment.

It does this with next-to-no paid staff but with the help of around 100,000 full and part-time volunteers. Even the 170 female monks at the Tzu Chi monastery are expected to support themselves. They make crackers and other foodstuffs which are sold around the country. This means the Foundation, and monastery, have minimal overheads, which is one reason they attract support from so many Taiwanese business people.

Tzu Chi volunteers work all over the world – from providing free medical care to illegal immigrants in the US, distributing emergency supplies in New Orleans after Hurricane Katrina, to work in Afghanistan, Myanmar and mainland China. Its, and Taiwan’s, unique international position mean it is often allowed into places where traditional Western NGOs would not be welcomed.

International relief is based on the principle of “direct giving” – Tzu Chi does not just chuck around sacks of rice but, where possible, prepares hot food for people in need. The foundation aims to maintain the dignity of victims of natural disasters in the way that food is distributed and also by getting the victims help in helping each other.

A senior figure in Tzu Chi's international volunteer programme, an ex-financial consultant at Merrill Lynch, told us the group tries to buy food and fertiliser locally for emergency relief operations - if it can do so without inflating prices. He said this was usually possible in areas where the UN's World Food Programme was not working.

If local buying begins to increase prices then supplies are brought in from Taiwan and elsewhere. Tzu Chi has successfully negotiated direct donations in some surprising countries like North Korea, Myanmar and Iran. After long talks North Korea allowed the group to distribute food in some areas. Myanmar also relented, for some areas, after six days of negotiating to allow Tzu Chi in to help people left hungry after Cyclone Nargis in May 2008. As well as emergency food aid the group provided fertiliser and seed to get fresh crops planted.

Tzu Chi always aims to provide long-term help not just a few days of food. They try to treat recipients with respect and dignity - haircuts and perms are organised alongside more practical help. There is, we were assured, no attempt at evangelising or pushing the Buddhist message except by example. After the Ban earthquake in Iran in 2003, after providing 2,500 tons of rice, blankets and medical care, the group built five schools for 2,000 pupils which were then handed back to the Iranian government.

The Foundation became interested in environmental protection in 1990 and now runs 4,500 recycling centres across Taiwan, all run by volunteers. We started our trip in Taiwan with a visit to a centre in Taipei run by Mrs Chow: 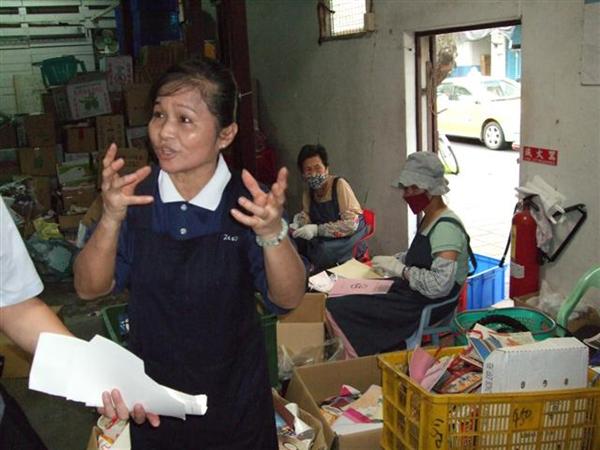 Paper is divided by hand into white or coloured - shiny covers and book spines are recycled separately. The centres provide almost a third of the running cost of Tzu Chi radio and TV stations. 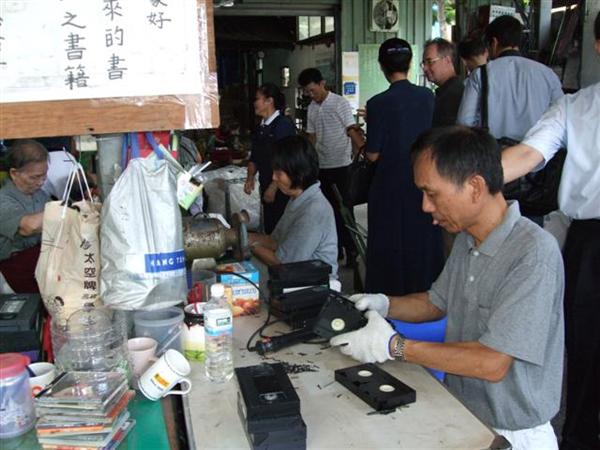 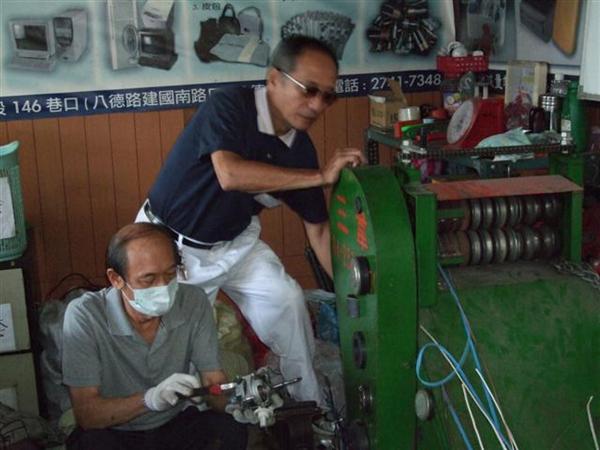 Copper wire stripped of its insulation.

Apart from helping Taiwan reduce its need for landfill sites the centres aim to provide fulfilling work for the mostly elderly volunteers. This considered as true in the recycling centres as it is for Tzu Chi’s international relief work – it is considered an honour to be able to give.

Some of the plastic bottles are made into blankets and shirts, using volunteered time, expertise and equipment from local textile firms. Whether this was really an environmentally positive process bearing in mind the amount of energy presumably required was not entirely clear. The blankets are distributed as part of Tzu Chi’s emergency relief efforts. The seven stage process was perfected by the Foundation with the help of several different textile companies.

Next page: The revolution will be televised
Page: