Workers in the media industry face either an intoxicating future or one filled with doom because of Apple's Final Cut software and unifying digitisation removing layers of complexity from their work. That's the theme coming out of a tapeless media summit in held last week in London's Soho, a centre for media production and post-production work.

That tape's time is passing was the starting point. Cameras which used to record to a tape cartridge in the camera body now record to flash cards. This is good in that video transfer from the camera is faster but bad because the flash card is not an archive medium, whereas tape is, albeit one slagged off at the seminar. The troubles with tape archives are that tapes decay and get damaged. They get stored in a vault somewhere, making them hard to get at, and the cataloguing of what's on the tape is pretty rudimentary and not necessarily high-standard.

The media tape vault is a place old clips are sent to die through lack of use, an offline video cemetery when what's needed is an old clip online reference vault. 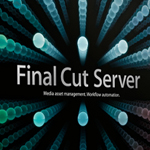 As the cost of video-editing equipment has come down and the capabilities of commodity server-based software, such as Apple's Final Cut Pro, have increased layers of complex older technology, with machines costing hundreds of thousands, even millions of pounds, being rendered redundant. The people in the industry whose work and skills are based on this equipment face job destruction. They might as well be working in analogue camera film developing and printing. Just as digitisation swept away those jobs and trades so the same is happening in video production and editing.

With software like Final Cut, the video editing server is becoming the single window through which video editors do their work, using plug-ins to Final Cut such as Motion, where necessary. When constructing a video obituary of a rock star they don't want to have to send a runner to a tape vault somewhere. It takes too long, it's uncertain what they'll find and the tapes may not actually be properly readable when brought back to the editing suite.

The presenters told us that archiving onto removable hard drives, like La Cie's, wasn't much better. The drives decayed over time if not used and ones stored more than five years may not be fully readable, as well as suffering from the same erratic and uncertain cataloguing of their contents as tape.

The Apple fanboys presented a picture of an Apple universe at the heart of a video editing suite, with Macs running Final Cut, a Final Cut Server doing the media asset management, an Xsan providing the online access to current clips being worked upon together with modified clips, and metadata about the clips and the finished video being put together.

There was some concern about Apple's dominant position, but most people present reckoned Apple had the better tools and that was that. In passing it seems that in this world Apple might have achieved a roughly similar position to Oracle in the database world by using cheap commodity hardware and better software to compete with more expensive proprietary hardware products. Of course, Apple makes its commodity notebook, desktop and server hardware proprietary so the Oracle parallel is not that good.

Anyway, being a video editor working in this Apple-centric way, it was a nonsense to have to archive off the finished clips to tape or removable disk. You could keep on growing the SAN but that, we were told, is expensive and unwieldy. Better to have an online disk-based archive.

Well, yes indeed. Step forward Object Matrix and its MatrixStore. It's a clusterable set of nodes, three at a minimum, with each node having up to 24TB of SATA disk storage (1TB drives) and Linux x86 server running the MatrixStore software. The capacity is no problem for now as a 50x4TB node setup has been tested and the company says 24TB nodes would work just as well, meaning a 1.2PB cluster is feasible.

Object Matrix is primarily a software company and makes its technology available, in the UK only at present, as an integrated hardware and software product with Linux cluster nodes or as software only for Mac OS nodes.

The software is integrated with Final Cut so that a complete Final Cut production can be archived with one click. That means both the video clips and the metadata about the clips - time and data, length, frame rate, colour model, location, title, and much, much more. A Final Cut user could be working on a Led Zeppelin obituary video and search MatrixStore for all Led Zeppelin clips. The list is seen in Final Cut and individual clips can be reviewed and selected or rejected in minutes rather than hours.

What this also means in the long term is that should Final Cut software be replaced by some other software then converters could be built, using XML say, that could render the archived Final Cut product ingestable by the new software. It's not totally tied to Apple.

There's a de-skilling, a de-layering of the media production workload with less and less need for substantial technical skills below the video editing layer and greater ability for video editors to concentrate on the creative side of their job. The enabler for this, the driver, is Final Cut Pro, Final Cut Server and the Mac universe, the Apple fans declare. Archival disk storage is not a driver - it merely helps by bringing old video clips back online.

The video editors present were largely positive about all this - and why not? What driver or transport manager wouldn't like cheaper, faster vehicles that could do more and replace whole sets of specialised, more expensive vehicles? Just don't expect the drivers and mechanics of the replaced vehicles to be ecstatic about the prospect.

Apple's dominance for them is just one big threat and the final cut is likely to be their jobs. ®