The next version of Microsoft's C# will see interoperability between languages for the enterprise and web, and with Microsoft's legacy COM architecture.

C# 4.0, expected with the next version of Visual Studio, will support something called dynamic look up in order to call dynamic languages like JavaScript, Python and IronPython from inside C#. Visual Basic .NET already works with dynamic look up.

The idea is you'll be able to write C# code that looks like Office for Visual Basic as the dynamic look up will let you use C# to invoke any COM IDispatch object.

The statically typed C# was introduced with .NET in 2000 and has found huge success in the enterprise during the intervening eight years.

Microsoft, though, wants to make it easier for developers to call classes in dynamic-typed languages, particularly its versions of Python and Ruby - IronPython and IronRuby. 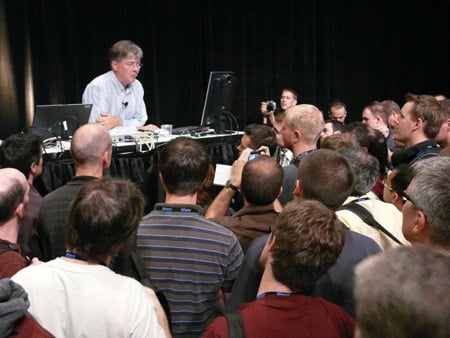 Hejlsberg, speaking at Microsoft's Professional Developers' Conference (PDC), said he wanted to bring down the barriers not make things harder for those building in C# and using declarative and dynamic programming languages and methods.

"People say: 'Anders have you gone stark raving mad, haven't you taught us for 10 years static is the right and only way?," he told PDC.

"I'm not saying re-write all your code to be dynamic... However there are an increasing number of things that are important to talk to in your applications that are not dynamically typed and we should ask: should we make it harder to talk to, or easier?'". ®