The number of Windows users surfing the web fell below 90 per cent for the first time, making for Microsoft's biggest market share drop in the past two years, according to new statistics.

Net Applications, which compiled the November data based on the sites it monitors, reports systems running Windows during the month was 89.69 per cent of traffic. That's a change from 90.46 per cent in October.

Meanwhile, Mac users took 8.82 per cent of the market share pie, a gain from 8.21 per cent from the previous month. November is the company's third month running with a share of internet traffic above 8 per cent.

Below Mac user numbers, we're talking much smaller shares of internet traffic. Linux had a bump to 0.82 per cent from 0.71 per cent of web browsers. The iPhone grabbed 0.37 per cent of traffic, which also was a small increase.

Obviously, Microsoft's 89.69 per cent isn't something to sneeze at (as made clear by El Reg's super scientific graph below) — but hey, it's a big symbolic loss in our deca-based number system. 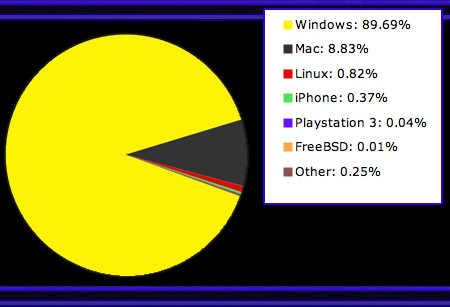 Net Applications partially attributes Microsoft's November slip to the US Thanksgiving holiday, saying most traffic on Windows machines happens during work hours. When folks arrive at home, they're more likely to flip on a Mac – or perhaps even a Playstation, it would seem.

A complete breakdown of the numbers can be found here. ®