Supersonic fighters could snuff out hurricanes

A Russian professor at an Ohio university has applied to patent a method for snuffing out hurricanes by flying jet fighters around the eye of the storm at supersonic speeds.

Professor Arkadii Leonov and his collaborator Atanas Gagov, both of Akron Uni, actually filed their patent application "Hurricane Suppression by Supersonic Boom" last year. It was unearthed by the New Scientist patents column this week. 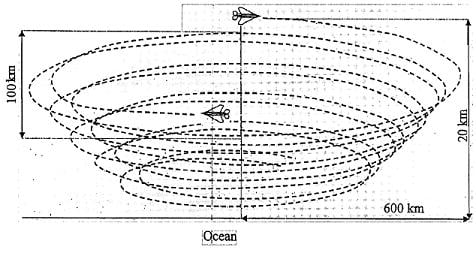 Do jet fighters have enough poke for the eye of the storm?

"To a side observer a hurricane/typhoon looks like as a giant machine, whose parts all work in unison to maintain its steady and stable functioning," write the two boffins. Their idea is essentially to disrupt one or more parts of the hurricane machine by the use of sonic booms - the conical shockwaves which trail behind objects moving faster than sound.

The simplest and easiest way to produce a large sonic boom at present is to use a jet fighter, and this is the method suggested by Leonov and Gagov.

According to the two boffins:

Given their nature, supersonic booms are potentially very efficient in hurricane/typhoon suppression, mitigation and/or elimination. This is because, while not wishing to be bound to any one theory, supersonic booms destabilize and/or destroy the two major dynamic features of a hurricane/typhoon - steady maximum rotational speed in the eye wall area and the pressure deficiency located at/near a hurricane's/typhoon's vertical axis of revolution. For example, two F-4 jet fighters flying at approximately Mach 1.5 are sufficient, in one embodiment, to suppress, mitigate and/or destroy a typical sized hurricane/typhoon. Of course, larger or smaller hurricanes/typhoons may necessitate the need for more or less supersonic capable aircraft.

The profs don't specify how long the two Phantoms would have to circle the eye in order to choke off the hurricane, but this could be a problem. Most supersonic jets need to use afterburners to go faster than Mach 1, which uses up their fuel very rapidly. There are a few planes, for instance the new F-22 Raptor (and the appropriately-named Eurofighter Typhoon) which can "supercruise" - fly supersonic without afterburner - but this still uses fuel quickly compared to subsonic flight.

Even if you had supercruising jets, they might not be able to stay fast for long at the altitudes required by Leonov and Gagov. Some at least of the proposed flight plans call for low-altitude work above the sea. A diagram attached to the patent app suggests that fighters might have to fly as many as six circuits of a storm centre, on an elliptical track 600 by 100 km in dimension. This does seem likely to mean that fuel endurance would be an issue.

Anyway, technical questions like this rather pale into insignificance beside the obvious one. Why patent such an idea, as opposed to say writing an academic paper? Do Leonov and Gagov hope to charge fees to governments using "their" proprietary hurricane-busting tactic?