Development continues on the US Forces' network-controlled, crewless homing missile system. The Non Line of Sight Launch System (NLOS-LS), aka "Netfires", has had a successful test firing, and is now being fitted aboard the US Navy's new inshore warships.

The NLOS-LS comes in the form of a large box about 1.5m tall and light enough to be driven about in a Humvee. The box has its own power and network comms systems, and holds 15 vertical-launch missiles. It can be fired from anywhere - strapped down in a truck bed or on a ship's deck, or simply standing in a field. It needs no crew, taking its firing orders from a command node on the military network. The system was originally known as "rockets in a box". 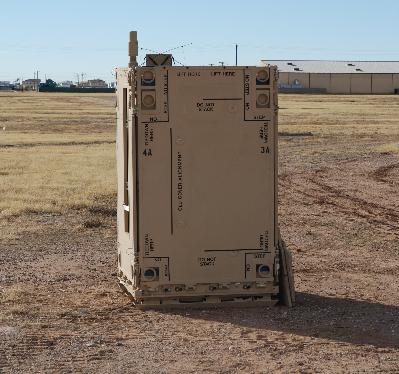 The multipack missiles are also known as Precision Attack Munitions (PAMs). They are networked and can navigate in flight using a combination of GPS and inertial sensors.

The idea is that a soldier with a network terminal would be able to mark a target, and far away a PAM pocket cruise-missile would leap out of its box and fly autonomously to the nominated location, homing in for the final approach assisted by either a laser-pointer dot from the soldier or its own infrared sensor. If the target moves while the missile is in transit, no problem - it's on the network and can receive updates on the fly.

Alternatively the target might be spotted and marked by any of a range of netted-up recce systems: UAVs, aircraft, whatever.

The PAM had its first end-to-end test firing recently, operating as a network node throughout its flight after taking off from a launch box at the White Sands missile range in New Mexico. On reaching the target area, it homed in on a laser dot successfully to destroy an old T-72 tank - and sent back imagery across the network as it did so, confirming what it was hitting.

The Netfires/NLOS-LS is also going to sea, according to reports. The US Navy's new inshore-warfare Littoral Combat Ships are modular in nature, with three bays where different payloads can be fitted. If all three bays were filled with NLOS-LS rocket boxes, a single ship would have 180 missiles at its disposal. These could be used to sink enemy fast-attack boats, or to provide fire support ashore.

"NLOS-LS not only protects our ship and sea-base assets but our Marines and Navy SEALS as they go ashore,” said a Navy spokesman.

One view of the new multipack networked missiles is that they're just another high-tech toy for the armed forces to fool about with - more waste on the part of the military industrial complex.

If you wanted to, though, you might be a bit more impressed by the fact that a single infantryman (or UAV) can now knock out a dozen or more fast-moving tanks, needing no more backup than a Humvee- or helicopter-load of gear sitting unattended twenty miles away. NLOS-LS missile packs can even be parachuted into position from transport aircraft; it would be easy to position them ahead of an old-style tank assault.

You might say that this is a significant nail in the coffin of both tanks and heavy artillery, if NLOS-LS can do all it promises.

With no more tanks and heavy artillery, armies would be very different. They might have an awful lot less gunners, supply people, tank crews and mechanics. They might have a lot more face-to-face footsoldiers, but a lot fewer people overall. They might be faster to get somewhere, more able to focus on modern counterinsurgency fighting without having a cow all the time about losing their skills in oldschool armour/artillery warfare.

And they might actually be cheaper, too. NLOS-LS netmissile-boxes wouldn't cost much to have compared to tank and artillery regiments and all their panoply of heavy, fuel-guzzling, maintenance-intensive equipment. The rocket boxes might also take a lot of work away from attack helicopters and high-spec'd close support jets, again potentially saving a lot on cash and manpower.

So maybe this isn't just another shiny piece of irrelevant kit. Given the number of important military jobs it threatens, however, it could easily fail to gain traction. Then, like all the networked-up components of the US Army's Future Combat Systems plan, there are cyber security issues to worry about.

NLOS-LS is currently running though a six-year design and development phase, scheduled to complete in 2010. ®