Religious leaders have united to express their dismay at a custom range of Lego figures - including a "Toy Taliban" armed to the teeth with C96 broomhandle Mauser pistol, AK Assault Rifle and M67 frag grenades. 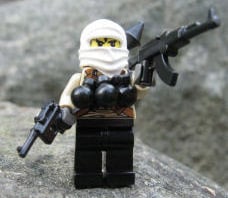 The offending terrorist - made by US firm BrickArms and punted for £9.50 to impressionable UK kiddies here - didn't much impress Mohammed Shaffiq, of Muslim organisation The Ramadhan Foundation, who slammed the toy as “absolutely disgusting”.

He told the Sun: “It is glorifying terrorism - the makers should be ashamed. We should be coming together to unite against terrorism, but how is that possible when children are playing with toys like this?”

Parents who feel uneasy about their kids reenacting exciting moments in recent Afghan history might consider buying their offspring an SS major instead - a snip at just eight quid.

Or maybe not. As Edie Friedman, director of the Jewish Council for Racial Equality, explained: “These distasteful toys are something we could all well do without, especially when there is so much tension around.”

Lego today issued a statement which reads: "LEGO® UK is not associated with the toys being sold by BrickArms, which have been customised without LEGO UK’s knowledge or permission.

"BrickArms is not licensed by LEGO UK to customise LEGO figures and has no links to the LEGO brand. LEGO UK is committed to developing toys which enrich childhood by encouraging imaginative and creative play - and does not endorse products that do not fit with this philosophy." ®

For something less controversial, try the rather good miniature James Bond.