Hackintosh clone surfaces in the Argentine

'Applications may not function properly'

Apparently, Psystar's latest legal troubles - the dismissal of the company's anti-trust complaint against Apple and the upgrading of Apple's suit against them to include alleged DMCA violations - haven't deterred Argentina-based OpeniMac from dipping their toes into the faux-Mac waters.

Under the banner of "Prestaciones de Mac. Precio de PC" (which, according to our junior-high Spanish, translates to "The capabilities of a Mac. The price of a PC"), the web site of these plucky pampas-pounders advertises two versions of their sure-to-be-a-trademark-violation-named OpeniMac and OpeniMacPRO. 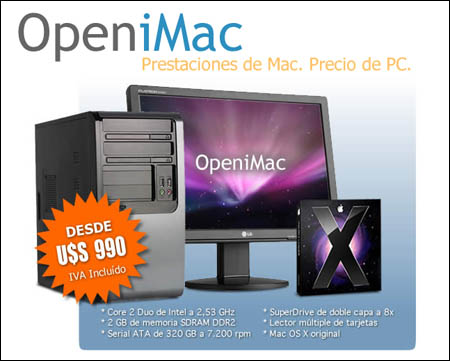 What you see may not be what you get

The OpeniMacPRO features a 3GHz Intel Core 2 Duo, 4GB of RAM, a 500GB hard drive (in one of four drive bays), the same SuperDrive and USB/FireWire ports, an Nvidia GeForce GS (again, no indication of which GS) with 1GB of VRAM, and a 20-inch LG display included in its $1,710 price.

The web site's "Terminos de la licencia" includes a few interesting caveats. For one (our translation): "OpeniMac does not guarantee that any application will function properly as it would on an Apple computer." Also, "OpeniMac will not be legally responsible for the use of the computer by the user in any way."

Those disclaimers certainly give you a warm and fuzzy feeling of security, don't they?

And then there's the small print at the bottom of the web site that says, "Las fotos son meramente ilustrativas." Or, in English, "The photos are solely illustrative" - which, in any language, translates to "What we're showing you may be total horse pucky." ®