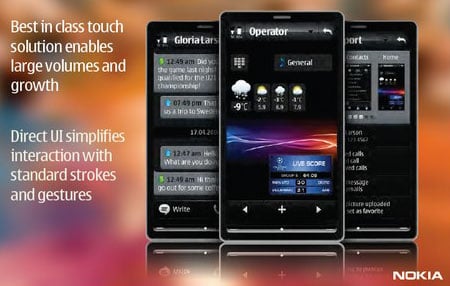 The picture, which Nokia has already confirmed is authentic, shows three shots of a full touchscreen talker. In each shot, the phone’s running a different application, ranging from a weather information screen to an iPhone-style layout of an SMS conversation.

Accompanying the images is a short teaser that describes the UI. “Direct UI simplifies interaction with standard strokes and gestures,” we’re told.

What’s interesting is that the UI looks nothing like those on modern-day Nokia phones, including the recently launched N97. However, this latest, unnamed phone's UI does appear to be widget based, as is the one on the N97.

Nokia’s been quick to silence speculation that the pictured phone is an upcoming device, though. The phone firm told SlashGear that the talker’s purely a way of highlighting its latest UI improvements, presumably following the firm’s acquisition of Symbian earlier this month.

But why couldn’t these enhancements - whatever they may be - have been shown off on an existing talker?