iTunes minus the store - and the fanbois

Amarok 2's user interface is a major overhaul of the Amarok 1.4x GUI, both aesthetically and functionally. It's also moved from the KDE 3 to KDE 4 framework to hook into the desktop environment's latest toys like Solid, Phonon, and Plasma.

"KDE4 brings many new technologies and design patterns, and we decided to use this opportunity to improve upon Amarok's original design," the Amarok team said today in the release announcement. 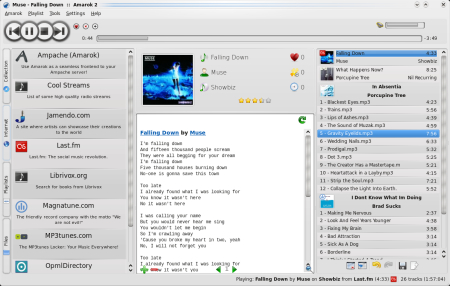 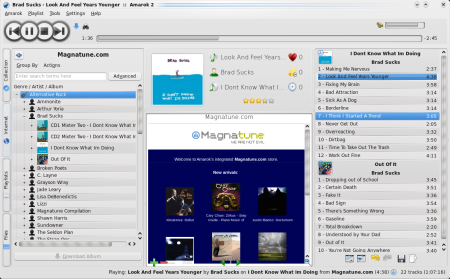 The face-lift focuses on making contextual information like song lyrics and albums from the same artist more accessible, according to Amarok. It also includes integration with online music services like Jamendo, Magnatune, and Ampache.

Take note several useful features in version 1.4 aren't presently available in Amarok 2, however, and some may never make the cut.

Many of these missing features, like queuing and filtering in the playlist will return within a few releases. Other features such as visualizations and support for portable media players require improvements in the underlying KDE infrastructure. They will return as KE4 support improves. Some features, such as the player window or support for databases other than MySQL, have been removed because either they posed insurmountable programming problems, or they didn't fit our design decisions on how to distinguish Amarok in a saturated market of music players.

The release is now available for all major Linux distributions. Windows and Mac OS X builds are currently only in beta. Catch the 2.0 release here. ®