The Mother of All Demos — 150 years ahead of its time

It’s not the mouse. It’s what you do with it

As van Dam points out, Engelbart's system seamlessly combined its tools in ways our modern machines do not. "[NLS] hasn't really been realized with the mainstream market," van Dam says. "We're looking back at this with a kind of nostalgia, asking what this magician did for us. But ask yourself this: What do we really have today?

"We have a collection of tools at out disposal that don't inter-operate. We've got Microsoft Word. We've got PowerPoint. We've got Illustrator. We've got Photoshop. We can do a lot of individual things that were done with NLS and we can do them with more functionality...But they don't work together. They don't play nice together. And most of the time, what you've got is an import/export capability that serves as a lowest common denominator."

For van Dam - and others who witnessed it first hand - NLS went much deeper than the GUIs of today. "Everything inter-operated in this super rich environment. And if you look at the demo carefully, it's about modifying, it's about studying, it's about being really analytical, and reflecting about what's happening."

This last point is hammered home by Alan Kay, another firsthand witness to Engelbart's 1968 demo. "I was shivering like mad, with a 104 degree temperature," he says. "But I was determined to see it." 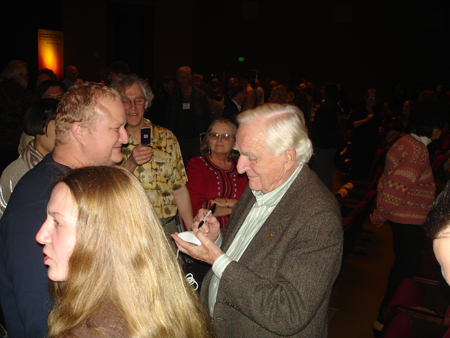 When Kay thinks of NLS, he remembers Henry David Thoreau's response to the first transatlantic cable. "We are eager to tunnel under the Atlantic and bring the Old World some weeks closer to the New," Thoreau wrote in Walden. "But perchance the first news that will leak through into the broad, flapping American ear will be that Princess Adelaide has the whooping cough."

Kay calls this "one of the earliest examples of capturing the two sides of technology. Here's this incredibly difficult technical feat that could be used for expressing important information back and forth. But Thoreau understood exactly who human beings are and what they like to do with their technology."

Like van Dam, Kay argues that Engelbart's interactive system hasn't been realized. "You may have noticed after watching the demo that [NLS's] response time is a just a little bit better than we have today." But his bigger point is that the ideas that did survive are now dedicated to transmitting the 21-century equivalent of Princess Adelaide's whooping cough.

NLS wasn't meant to enhance the transatlantic cable, Kay says. It was meant to create an entirely new form of collaboration. "It showed that ideas could be organized in a different way, built in a different way. What we were looking at was not something that was trying to imitate what was already there.

"The jury is still out on how long - and whether - people are actually going to understand this." It took the world 150 years to realize the true power of the printing press, Kays says, citing Thomas Paine's Common Sense as the publication that finally did the trick. And he wonders if we will need another 150 years to embrace NLS.

NLS was designed to harness the power of "collective intelligence" - to create a deeper level of thought. His research group was dedicated to "augmenting human intellect." But forty years on, Engelbart's core vision has vanished. NLS has devolved into Twitter.

But Kay still has hope. "We haven't forgotten NLS, after 40 years. It's as good today as it was when we first saw it. The real significance of NLS is that it put a difficult idea into the world and it put it into the world so well that none of us can forget - and everyone will leave here today and go out and try to get others to understand it." ®

You can view The Mother of All Demos here.