Steering the IT Function

Running a tight ship, or running in circles?

The exact quote is proving elusive, but to paraphrase Sir Macca when asked whether Oasis sounded anything like The Beatles, ‘You’d have to be riding blindfold, backwards across the desert on a camel not to have noticed.’ And similarly blindingly obvious is that, for IT to be done right, it needs some level of co-ordination – an architectural view, if I may.

What seems less obvious is what this view should entail, and indeed, how much of it should take place. Earlier this week we ran a short poll to find out what level of steering was taking place in our IT departments, and in summary the answer was ‘not a lot’ (Figure 1). 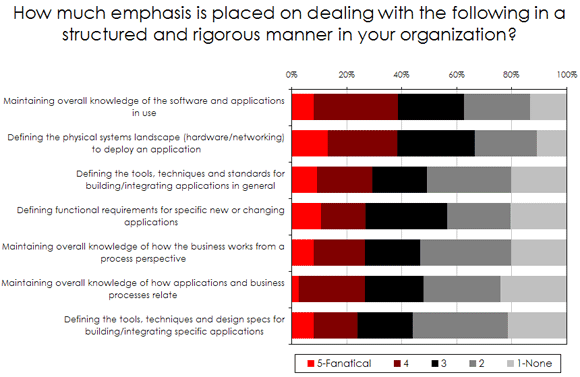 Top of the priority list was keeping a clear technical view – either of the software or the hardware infrastructure, but other types of co-ordination were in vogue in less than a quarter of respondent organisations. To be fair, we know the numbers would undoubtedly increase in larger enterprises, but is this really only a big company issue? We think not. And indeed, this finding seems stranger still when compared to the fact that over 40% of respondents have some kind of co-ordination body in place – might it be reasonable to ask, what exactly these people are doing other than keeping such a picture? (Figure 2). 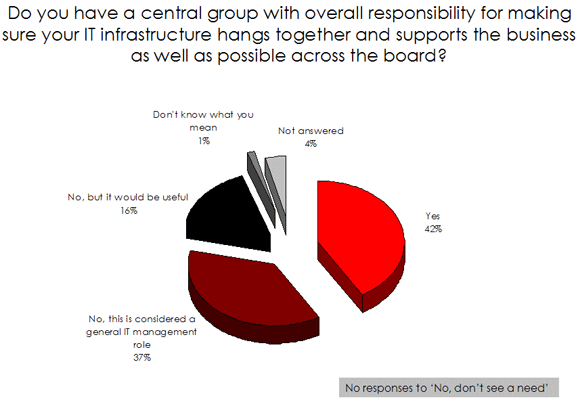 Maybe that’s a bit harsh, but there seems to be something which doesn’t quite compute. Or maybe it does – perhaps this is just an example of how IT isn’t quite as well co-ordinated as some pundits would have us believe. Neither does there seem to be much consistency in the roles, or groups, doing the work: we’ve had a pretty active debate about architects this week, and the poll revealed a similar lack of similarity at the group level – some companies have a steering board, others an architecture team or a governance board.

The lesson is as much for those of us trying to understand about how IT works, as those who are doing it. While that elite group of CIOs are lying awake thinking about agility, business alignment and all that jazz, perhaps the rest of us really are just working on coping strategies, and dealing with the issues as they happen. This was certainly the impression given by one of the earlier polls in this series, which found it was the case for over half of its respondents.

To have a strategy in place, or to co-ordinate the IT function may be important, for sure, but the reasons why this is not always done are legion and there are places where strategic platitudes just won’t be enough. Clear vision is great, but for those consigned to be blindfold, riding backwards across the desert on a camel, what options are open? We’re open to answers.