Revenge is a dish best served cold, it's said.

When it comes to the internet, editorial mistakes are best when the article in question tackles the subject of typing and those producing the piece have flagged up other peoples' gaffes.

And so to The Daily Telegraph, which reported online Thursday how a UK judge slammed lawyers for excessive fees after they'd represented a woman who'd prosecuted her former employer over repetitive-strain injury. 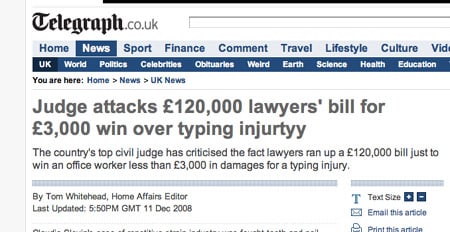 The slip comes five months after The Torygraph treated UK readers to the ineptitudes of a US local newspaper, New Hampshire's Valley News that couldn't spell its own name right on its front page.

The Torygraph ran a piece on how the New Hampshire Valley News subsequently ran an editor's note acknowledging the error.

"Given that we routinely call on other institutions to hold themselves accountable for the [sic] mistakes, let us say for the record: We sure feel silly," the News wrote.

You're not the only one feeling silly now, New Hampshire Valley News. ®