A picture of Lenovo’s first foray into the mobile phone market has been leaked online. 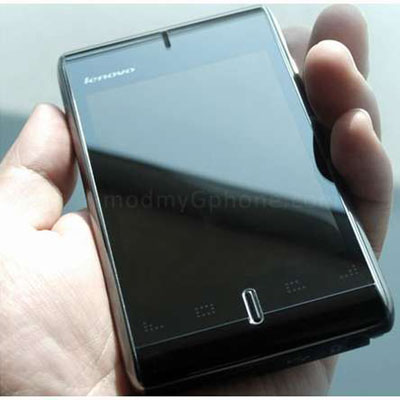 Rumoured to be called the OPhone, the mystery device is – according to several online sources – thought to run on Google’s Android platform.

What we can ascertain from the picture is that the talker has a full touchscreen, with four Braille-like icons running along the bottom of the screen. These are probably used for placing and ending calls.

The only physical button we can see rests in-between these four icons and, if the iPhone’s anything to go by, will be used for accessing the OPhone’s main menu.

We can also just about make out a headphone connection image on the very bottom of the mystery talker, so it’s safe to say the device has a headphone port and is set-up for music and, like as not, video.

Sources have also reported that the Lenovo phone’s been designed to work for network operator China Mobile, which suggests that it may not wash up on Blighty’s fair shores for some time yet.