Economists: European ancestors are what make you rich

A pair of American economists believe they have found out the underlying factor which predicts which people will be rich and which ones poor. The men believe that the wealth of a country is directly related to what proportion of its population's ancestors lived in Europe five hundred years ago.

In a department-of the-bleedin-obvious bit of collation, profs Louis Putterman and David Weil of Brown University point out that most of the nations on Earth with high per-capita GDP are populated predominantly by people whose ancestors lived in Europe before the Age of Exploration. 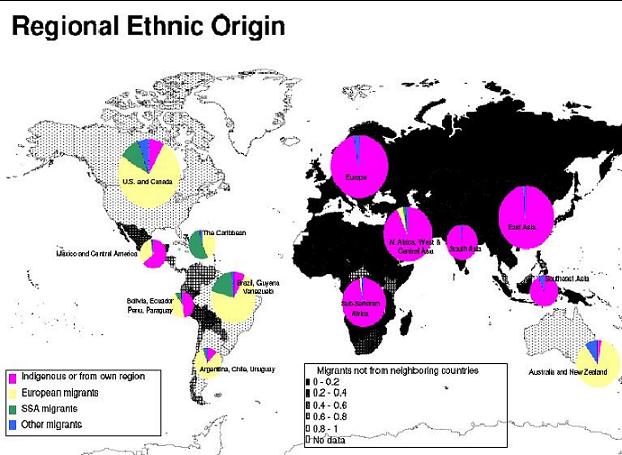 It's not what you know or who you know. It's who your great18-grandad knew.

The power of regional origins is illustrated by the fact that 44 per cent of the variance in 2000 per capita GDP is accounted for by the share of the population’s ancestors that lived in Europe in 1500... The results indicate a degree of persistence of capacity to generate or to capture income that is almost breathtaking.

They suggest that "developmental advantages acquired hundreds or even thousands of years ago" could be responsible for the fact that those who have pre-Columbian Euro ancestors are generally haves, and those who have not are have-nots.

The influence of population origins suggests that there is something that human families and communities transmit from generation to generation — perhaps a form of economic culture, a set of attitudes or beliefs, or informally transmitted capabilities — that is of... importance to economic success.

All that said, the cases of Japan (very rich, almost no European ancestors) and Latin American countries (not very rich, many as Euro-descended as the US and Canada are) seem to hint that there might be other factors in play. Indeed the Brown economists do acknowledge that other groups of people than Europeans have set out to colonise places in the modern era and done very well: whereas being moved across the oceans as slaves doesn't seem to help people at all.

To attempt to explain the 20th Century success stories of Taiwan and Singapore or the struggles of Haiti and the Dominican Republic without reference to their non-European population movements seems comparable to trying to explain the economic emergence of an Australia or a Canada with no mention of European colonization.

Nonetheless, Putterman and Weil believe that if the world's poor could learn to be more like European-descended people, they might become big economic successes too - perhaps, in timely fashion, just as the rich economies of the world are largely imploding.

"If we understand which culturally transmitted factors are important... we might be able to design policy interventions that could help less successful groups and countries to close their developmental gaps," say the economists. ®