Parachuted in to Whitehall bunfight

Exclusive A senior Vodafone network architecture specialist has been appointed by Jacqui Smith to draw up proposals for a multibillion pound central silo of communications data, amid a Whitehall row about the future of the project, The Register has learned.

The Home Office team responsible for the Interception Modernisation Programme (IMP) have been told to make the case for the expansion of state surveillance it would involve again, according to insiders. The plans were originally put forward by intelligence chiefs to "maintain capability" to intercept communications as use of internet-based technology - such as BT's new 21CN backbone - grows. Opponents have labelled such claims the "keep running to stand still" strategy, a satirical reference to Alice Through the Looking Glass.

In response to the civil service controversy over IMP, Jacqui Smith announced in October that the Communications Data Bill - the legislation that would mandate the project - would not come before Parliament during the current session. It began on December 3 and runs until the end of October 2009. Instead she said there will be a public consultation beginning in January.

Sources said the several dozen officials working on IMP recently moved away from the "hot house" atmosphere surrounding it in the Home Office to occupy government offices at Great George Street (known as GOGGS), off Parliament Square. The Home Office also recently created a director-level position to take charge of the project and installed the Vodafone man.

Tim Hayward, erstwhile senior programme manager at the UK's second largest mobile operator, was appointed IMP director in August. While at Vodafone he was responsible for 3G network architecture, according to careers information posted on the web.

A Vodafone spokeswoman said she could provide no details of Hayward's previous role at the firm.

Until June the IMP team worked under a lower level civil servant, who it's understood is no longer associated with the project.

Sources also confirmed that Vodafone, along with BT, has signed on for a £1bn IMP pilot project. It's planned the "black box" data harvesters that the electronic surveillance agency GCHQ wants to deploy throughout the UK communications infastructure will be inserted in Vodafone and BT's networks initially. A Vodafone spokeswoman said: "We are not involved in any pilot programme." 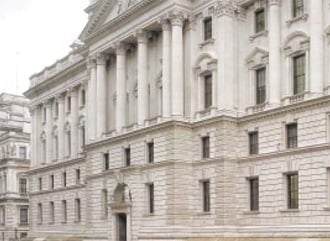 The probes would populate a pilot central database with details of who communicates with whom, when and where. The content of communications would not be fed to the database, but storing data about the communications of "people of interest" to law enforcement and the intelligence services, together with the black boxes, then would make wiretaps much easier to implement.

But now, industry sources sceptical about the wisdom and feasibility of IMP said its officials are effectively "fighting for their jobs" ahead of the consultation. When she decided to open a public consultation, Jacqui Smith ordered them to consider all options, including the possibility that no new system will be authorised.

Officials continue to meet industry executives responsible for cooperation with the intelligence services and law enforcement, but no significant details of the potential system have been revealed since the consultation was announced.

Indeed, in recent discussions with the ISP and telecoms industries, IMP officials have admitted they still have no accurate idea of how much a ubiquitous communications database would cost. A figure of £12bn has been widely reported, but according to Register sources "all they know is that the number would end in 'billion'".

If the Brown government does not approve IMP during this Parliament, however, it seems unlikely that intelligence chiefs will give up on the idea. They circulated documents suggesting a central communications "data warehouse" more than eight years ago. ®

Zoom to offer proper end-to-end encryption to free vid-chat accounts – not just paid-up bods – once you verify your phone number...

Hey, those warrantless smartphone searches at the US border? Unconstitutional, yeah? Civil-rights warriors ask court to settle this

Spies given carte blanche thanks to Trump order