Mercilessly squashing any vestiges of what rumors remained of a $99 iPhone, the megamall-master Walmart today let the world know that, yes, they will be offering the Jesus Phone to the world beginning on Sunday, but no, they won't be adding a $99 super-savior to the mix.

Walmart will sell the ubiquitous black 8GB iPhone for $197, and the 16GB unit in either black or white for $297. The service agreement will be the same old, same old: two years with AT&T. 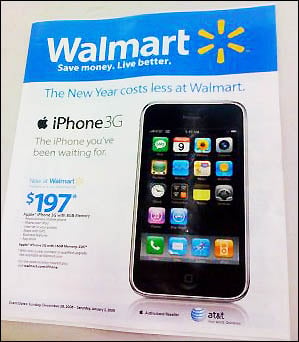 Thanks, Skippy Thorson, for the printed proof

All this 'Phoney foreplay, and all we get is a savings of two measley bucks? Merry %$#@!ing Christmas, Sam Walton.

Maybe it's now time to start another unsubstantiated rumor. How about that the much-reported iPhone nano is actually the $99 iPhone? That speculation should have sufficient legs to last until Phil Schiller's appearance on January 6th at Macworld Expo, don't you think?

One final note on this sad saga of dashed dreams: Computerworld - when reporting on l'affaire Walmart - said that the middle-American retailer "is expected to help Apple's efforts to reach conservative shoppers."

What, don't progressives, libertarians, and Greens also want to "Save money" and "Live better"?