"Pull my finger" has a whole new meaning

The US Patent and Trademark Office yesterday released Apple's most recent application, in which the company files for patent protection for ... wait for it ... a glove.

No, not a Power Glove. Patent #20090000010 is for what Apple calls a High tactility glove system designed to aid users in operating their multi-touch devices - think iPhones - in frigid weather. 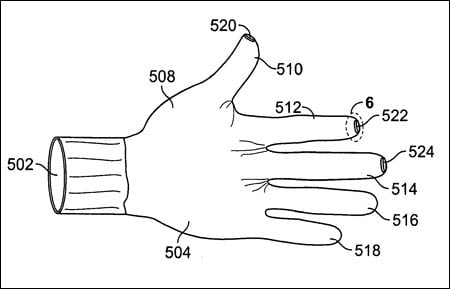 As the application says, "When users, in cold weather, wear thick or bulky gloves ... the loss of tactile feedback to the user may prevent the user from properly operating the electronic device, and may lead to frustration. Alternatively, if the user has to remove his gloves ... the user's hand may become cold and uncomfortable, which may also lead to user frustration." 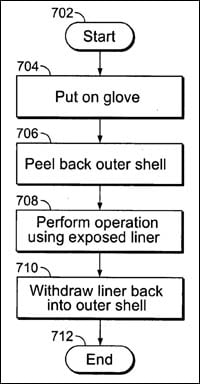 Fair enough. We don't want those poor iPhone users up in Frostbite Falls to be frustrated, do we?

Apple's glovely solution is two-layer "system" with an outer insulating layer and an internal conductive layer. In the fingertips of the outer layer there are "apertures" through which the user may thrust his or her desired digit so that it might appropriately caress a multi-touch display while still protected by the inner layer.

Also, check out the flow-chart (right) filed with the patent, which describes the series of activities a user must engage in to enjoy the benefits of this boon to mankind. Sorta brings you back to your first Basic-programming class, doesn't it?

Frankly, we had to examine the date on this application publication to ensure that it wasn't intended to be filed exactly three months in the future. After examination of the document, however, we feel comfortable in assuring you that it is, indeed, authentic. 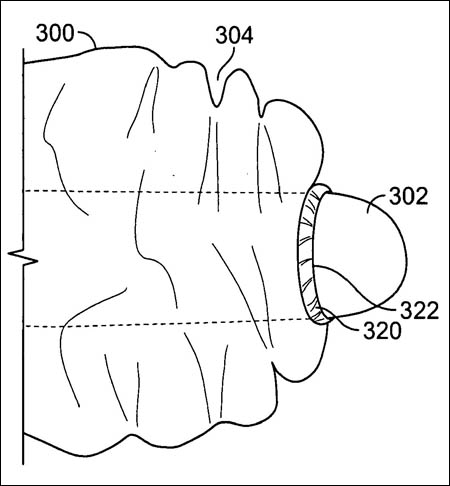 Is it just us, or is this vaguely disconcerting?

To be sure, the warmth and protection of scrolling, flicking, and pinching digits is a noble cause, but isn't a hole in the finger of a glove taking patent protection a wee bit too far? ®