Virgin Galactic leases itself a spaceport

Now looking to book Figrin D'an and the Modal Nodes

Virgin Galactic has signed with the state of New Mexico to build the nation's first rocketplane spaceport for flinging wealthy customers out of Earth's atmosphere.

Construction of the $198m spaceport is expected to begin as early as April, thanks to the Federal Aviation Administration granting a launch license to the New Mexico Spaceport Authority just days before the pact with Virgin Galactic. Committing Virgin to the spot was one condition that state officials had to meet before they could tap into approximately $140m of legislative funding for the project. 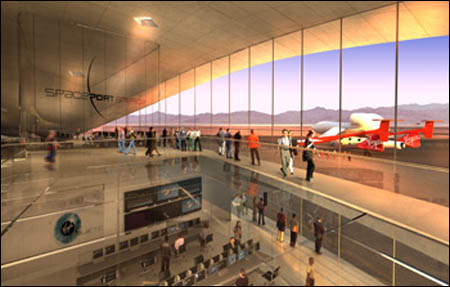 Remember, the enemy's base is down.

"The signing of this agreement is a momentous day for our state and has cemented New Mexico as the home of commercial space travel," Governor Bill Richardson said in a statement. "I want to thank Virgin Galactic for partnering with us to create a whole new industry that is going to transform the economy of Southern New Mexico - creating thousands of jobs, generating money for education, boosting tourism and attracting other companies and economic opportunities to the area."

From Spaceport America, wealthy passengers paying $200k each will be flung into suborbital space, where they will briefly experience weightlessness (due to free-fall, rather than from their pockets being $200k lighter).

The agreement coincides with the beginning of test flights for Virgin Galactic's WhiteKnight Two carrier craft in Mojave, California. The aircraft was developed from the original WhiteKnight, which piggybacked the Ansari X Prize-winning SpaceShipOne into space in 2004. Virgin plans to begin trials of the passenger-carrying SpaceShip Two rocketplanes this year, as well.

Spaceport America punters say there have already been several commercial launches at the site since April 2007 from aerospace firms such as Lockheed Martin, Armadillo Aerospace, UP Aerospace, Microgravity Enterprises, and Payload Specialties.

Completion of the terminal and hangar facility is scheduled for completion in 2010. Road construction to the site is already underway. ®