This season's must have shooters

Kodak is poised to kick off the 2009 Consumer Electronics Show with the unveiling of the latest additions to its snapper family. 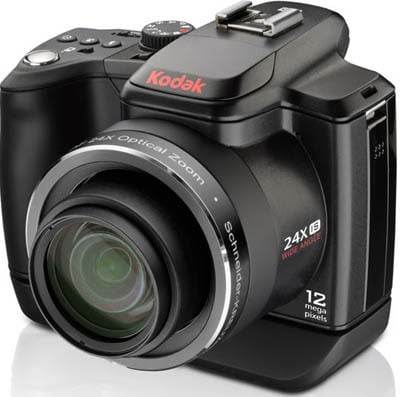 First up is the 12-megapixel Z980, which comes equipped with a 26mm wide-angle lens and 24x optical zoom capability. The shooter also has a vertical shutter release and detachable vertical grip.

Kodak’s established Smart Capture feature is included, which analyses scenes and adjusts the camera’s settings accordingly to give you the very best chance of capturing that perfect Ansel Adams skyline.

A hot shoe’s also included if you need a little more help lighting up your subject.

If the Z980 doesn’t take your fancy, then Kodak’s also unveiled the ten-megapixel M380 point-and-shoot snapper for... ahem... “style-savvy consumers”.

Although Kodak’s still keeping mum about many of the shooter’s features, it has said that the M380 has a 5x optical zoom and 2.7in LCD display.

All three M series Kodak snappers will be available in a range of body colours, including red and blue, silver, and red.

Prices or launch dates haven’t been confirmed yet for the Z980 or any of the three M series cameras. ®

And if and when it does, role lacks Cabinet position, complain Lords
Science28 Sep 2022 | 12

Manufacturers allegedly told to connect to NavIC by 2023, which did not make them happy at all
Personal Tech28 Sep 2022 | 9