Two heads are better than one, but does the same apply for two laptop screens? If you want to see for yourself your pockets had better be deep because the price of Lenovo’s dual-screen ThinkPad is now confirmed. 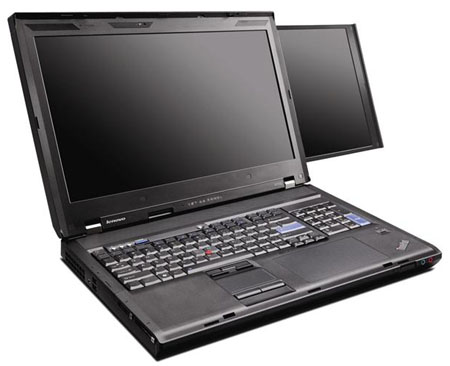 The W700ds’ existence was leaked online late last month, but Lenovo has now announced that the machine is now available to pre-order for a starting price of $3069 (£2097/€2291).

The second screen’s primary purpose remains unclear, but it could be useful for City traders hoping to do a bit of share dealing on the train home or anyone who always needs a clear view of a specific application, such as email.

Web surfing is possible thanks to integrated 802.11 b/g support and you’ll also get a fingerprint reader embedded into the machine as standard.

Lenovo’s W700ds ThinkPad is available to pre-order now through the firm’s US website, with shipping expected to start in about four weeks.