A US firm has developed a OLED display that’s flexible enough to be worn like a watch, yet large enough to display good quality images on. 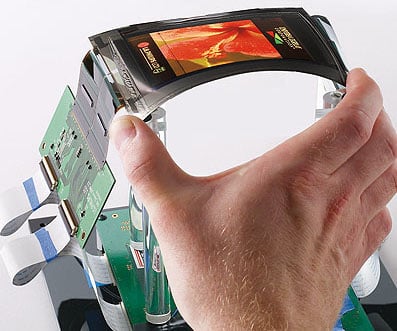 The Universal Display Corporation (UDC) worked with the US Department of Defence to develop what’s been dubbed a “wrist-worn flexible OLED communications device” prototype.

Based on a 4in flexible OLED display, the device was initially developed for military use. It’s not yet known what communications features the device has, if any, but UDC claimed the screen provides a crisp and beautiful picture with a wide viewing angle.

Although UDC hasn’t said much about how the device was constructed, it has stated that the screen’s fabricated onto a metal foil – which presumably helps with flexibility and strength.

UDC hopes to develop the device for the consumer market, but for the time being the prototype is on display at CES in Las Vegas. ®