An autonomous British robot submarine has just set out on a mission which will see it plunge deep beneath Antarctic ice shelves. Interestingly, the "Autosub" has no truck whatsoever with li-ion, fuel cells, stirling engines, hydrogen peroxide or any other trendy undersea power system: it runs on ordinary torch batteries, 5,000 of them to be exact. 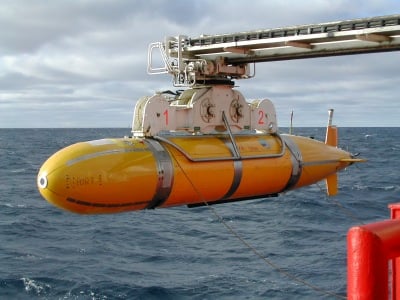 "People are surprised to hear that it's powered by 5,000 'D' sized alkaline torch batteries," said Steve McPhail of the British National Oceanography Center in Southampton, quoted by Reuters. "[But] this is the most economical way of powering a submarine like this."

The yellow, torpedo-like Autosub is completely autonomous as it cruises beneath the waves taking scientific readings, requiring no communication with the surface. Unlike more common Remotely Operated Vehicles (ROVs) it can justifiably be called a robot. It can go 400 kilometres at depths of as much as 1600m before its thousands of D-cells run flat and it must return to its mothership for fresh ones.

Reuters reports that the yellow subsea robot has just departed from the far southern port of Punta Arenas in Chile aboard the US icebreaker Nathaniel B Palmer, headed out on a 54 day voyage to Pine Island in Antarctica - home to one of the largest glaciers on the freezing austral continent.

"Pine Island glacier and the glacier alongside, the Thwaites, are moving faster than any other glaciers in Antarctica," said Stan Jacobs, chief scientist aboard the research vessel. "They are also accelerating ... You have to start worrying whether the system is speeding up, moving ice more rapidly into the ocean."

Jacobs and colleagues from the British Antarctic Survey (BAS) believe that sonar images and salinity readings gleaned by Autosub from beneath the ice shelves will help them to understand what's happening to the Antarctic ice. Even if nothing changes, according to the scientists, the glaciers in the Pine Island region normally add ice sufficient to raise sea levels by a quarter of a millimetre to the oceans every year: and the surface ice flow on Pine Island is up to 3.7km per year, rising from 2.4km pa in the 1990s.

"It's taken everyone by surprise," said Adrian Jenkins of the BAS. The scientists told the wire-service that nobody understands the processes behind the faster-flowing glaciers - which is where Autosub and its huge mountain of batteries come in. There's relief in sight for the weary boffins who have to put in thousands of fresh D-cells after each submarine mission, however - no doubt having honed their skills in some cases fitting batteries to festive toys for the kids. Their colleagues back in Southampton are working on a next-gen, rechargeable li-ion version.