Astronomers are celebrating 400 years since Galileo made his famous observations, which were fundamental in proving the heliocentric hypothesis, by pointing a replica of one of his original telescopes at the heavens to recreate his original stargaze.

In 1609, Galileo critically discovered four satellites orbiting Jupiter, which removed "major doubt about the heliocentric model - namely that the Earth appeared at the centre of things because only it had a satellite", as Physics World puts it.

Galileo's contribution to science was made possible by the invention of the telescope in the Netherlands in 1608, which he improved for use as an astronomical instrument. Now, scientists from the Institute and Museum of the History of Science and the Arcetri Observatory, both in Florence, have built a replica of one of his 'scopes and are "using it to generate the images that, to the best of their estimations, Galileo himself would have seen".

In fact, the telescope is not a replica of the instrument used to make the historic observations which appeared in 1610 in the Sidereus Nuncius (“Starry Messenger”), since only one lens survives. Rather, it's an "exact replica of the device that Galileo gave to his patron the Grand Duke of Tuscany, Cosimo II, in about 1610" - a 93cm-long device boasting two lenses and a magnification factor of around 20. 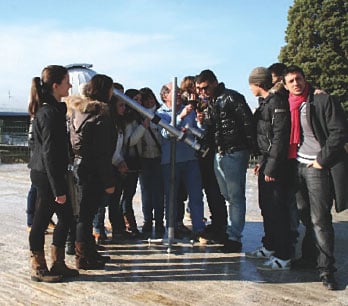 The Arcetri Observatory then constructed the instrument's body, behind which the team placed a 2300 × 3400 pixel CCD to generate "digital versions of the images that would form on the retina of a human eye placed behind the telescope".

The ultimate plan is to observe all of the bodies which appear in the Sidereus Nuncius. So far, the team has spied the Moon and Saturn, and has now turned its attention to Jupiter’s moons and the phases of Venus. The latter also proved instrumental in backing the heliocentric hypothesis by disproving the Ptolemaic assertion that "we would never see more than half of the surface of Venus illuminated by sunlight".

In carrying out its observations, the team has overcome the problems of modern light pollution and the relatively low sensitivity of the CCD compared to the human eye by finding "a suitable location in the hills beyond the city" of Florence and placing the 'scope on a rotating mount to allow "an exposure of several seconds", respectively.

The astronomers' efforts to recreate exactly what Galileo saw has, though, hit a slight occular snag. Physics World explains: "The researchers also want to work out what Galileo’s eye would have done with those images. And for that, they need access to his body."

Paolo Galluzzi, director of the Florence museum, explained: “We know that Galileo died blind, so he must have had visual problems. We want to look at his DNA to try and work out what these problems were.”

Unfortunately, the rector of Florence's Basilica of the Holy Cross, where Galileo's remains lie, is apparently none too keen on his tomb being opened. Galluzzi is described as "determined" to press the matter, and insisted: “Building the replica telescope and acquiring the digital images are the first two parts of the project. Understanding the physiology of Galileo’s eye is the third part. If we can achieve this, then we will be in a position to really understand how Galileo viewed the universe.”

The researchers' images will, Physics World notes, appear online at some stage. Whether or not they have been adjusted to take into account the state of Galileo's eyesight in 1609 remains to be seen. ®

This year is officially "International Year of Astronomy" - principally designed to "mark the 400th anniversary of Galileo’s first use of the telescope for astronomical observations", but also hoping to "generate interest in astronomy and science, especially in young people". Physics World has further details and event listings at the bottom of its Galileo 'scope piece.

*Brexit Satellite. What did you think we meant? GPS continues to rule the roost in Blighty for now
Science21 Sep 2020 | 221