How small is small? In this case, quite small, indeed.

This 25 per cent slimmer version of Microvision’s earlier Show prototype, now code named Show WX (for, argh, "wide experience"), is 11.8cm by 6cm by 1.4cm and weighs about 4.5 ounces. That 25 per cent reduction may not sound like much, but it promotes the device from being merely "really, really small" to "hey, that fits in my pocket." 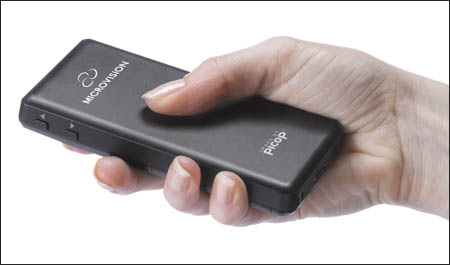 Actually, that's a rather small hand

The Show WX uses Microvision's laser-based PicoP Display Engine to project a 16:9 WVGA (848 by 480) image on any surface. As Brown describes it, the PicoP is "a little engine about the size of my thumb that has three lasers: red, green, and blue. They're combined optically to create a single point of white light, and that point is then beamed onto a MEMS mirror, which is articulated both vertically and horizontally, and by the means of electromagnetic fields we can fluctuate [the beam's intensity]."

The mirror is one millimeter in size. That might sound small, but it's huge in comparison to digital micromirror device (DMD) chips used in digital light processing (DLP) systems such as TV and projectors. DMDs can have over two million mirrors on a single chip. The difference between a DMD chip and Microvision's PicoP is that in a DLP system, each mirror corresponds to a single display pixel. In the Show WX, on the other hand, a single mirror handles the aiming of the laser beam as it scans horizontally and vertically to project the rows and columns of the video image.

In addition to the PicoP projection engine, the Show WX includes support circuitry and a lithium ion battery which can power the device for about two hours, which Brown described as "movie-capable."