One major advantage of using lasers as the light source for the Show WX is that lasers are inherently always in focus. That being the case, you can move the Show WX closer and further away from your projection surface or even project on a curved surface, with the image always remaining in focus. Of course, the closer you are to your projected surface, the brighter the image - remember the good ol' inverse square law from high school physics?

Brown rated the Show WX's brightness at 10 lumens, emphasizing that he was talking about "10 real lumens - we do not lie." In Brown's demonstration in a less-than-brilliantly lit service corridor of the Moscone Convention Center, home of Macworld Expo, the image was surprisingly bright at TV-set-sized projections, and quite serviceable - if nowhere near dazzling - at image sizes of three diagonal meters.

He also demonstrated the Show WX projecting on both the white hallway walls and the back of a black T-shirt worn by an obliging colleague. The images were quite impressive on the black surface, seeing as how the projector produces black by simply not projecting anything, making the contrast ratio on a black surface noticeably high - 10,000-to-1, according to Brown. 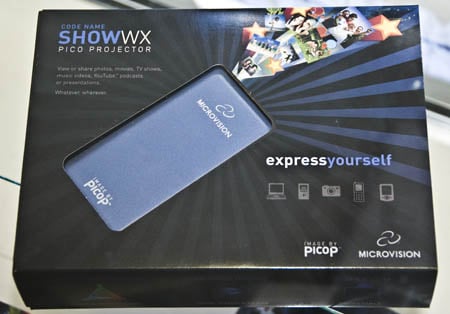 No, it's not yet a product. Yes, there's promotional packaging. Ah, marketing...

Brown said that the projector is "likely to launch at between four and five hundred dollars," but that Microvision is looking at different distribution channels. "We may not own-brand it or we may own-brand it, we may go through distributors or we may go through OEMs. We're really focused on making the engine good, and we're a bit agnostic about where it gets put."

The uses for the Show WX that Brown cited ranged from "fun" to "the elevator speech - which you literally can now do in the elevator. Or you can put it inside a MacBook, put it inside a camera, ultimately put it inside a cell phone." We can see it being used to share a video you just shot with a group of friends - projecting from the camera itself - or substituting for a recalcitrant office projector when you're giving a presentation on the road.

Then there's watching videos on the ceiling in bed. You pick the appropriate genre for that scenario.

Microvision will have its first "pilot units" to send to OEMs in mid-year. "By Christmas," Brown anticipates, "you'll be able to buy this in stores."

Let's hope. From what we saw, the Show WX or one of its possible variants could elicit more than a few ho-ho-hos in December. ®